FRENCH Rail Regulator Araf has rejected plans for a rolling road service between Pas-de-Calais and the Spanish border because it believes the concession structure adopted for the project could harm competition and risks impacting the performance of passenger services. 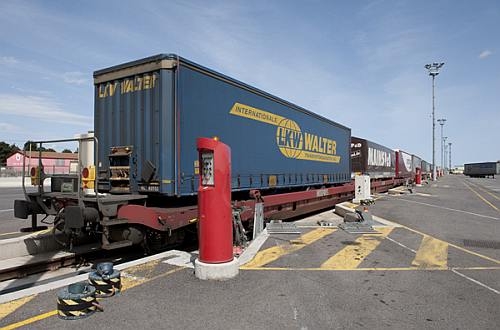 Viia Atlantic, a 100% subsidiary of French National Railways (SNCF) logistics unit SNCF Geodis was awarded a 17-year concession to develop and operate the service, which will carry lorries from a terminal at Dourges near Lille to Tarnos near Bayonne on the Atlantic coast.

Under the terms of the deal the French government will provide a €82m start-up grant while infrastructure manager French Rail Network (RFF) will invest €208m to adapt track and structures for the service. As concessionaire SNCF Geodis will invest €103m in the project.

Viia Atlantic is due to begin operating two return trips on the route in 2016 and services will be stepped up to four trains a day in 2021 with the aim of carrying around 300 lorries a day.

However, last month Araf unanimously adopted a negative opinion on the draft agreement because it believes the introduction of a subsidised service through a public service concession risks unfair competition for railfreight operators on other routes, including intermodal operators. Araf is now consulting with the French competition authority on the issue.

Araf has also expressed concern over RFF's ability to accommodate 750m-long trains (potentially up to 1050m in the longer-term), particularly on busier sections of the route such as Bordeaux – Bayonne, where it argues the performance of regional and long-distance passenger services could be compromised. Studies have shown that the construction of longer loops may not be enough to eliminate the risk of such conflicts.

In addition, Araf says contractual provisions, including the lack of a breakpoint in the 17-year concession and the stiff penalties that could be imposed on RFF if it fails to provide paths specified in the contract, are unbalanced and preclude fair and non-discriminatory access to the network.