TWO US rail projects have been recommended for $US 148.2m in grants, plus another four grade-separation schemes totalling $US 66m, out of 26 transport projects recommended by the US Department of Transportation (USDOT) to be awarded a total of $US 1.54bn in federal funds which form part of the 2018 Infrastructure for Rebuilding America (Infra) grant programme. 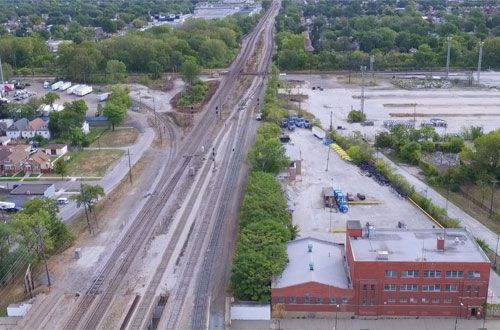 A flyover is planned at Forest Hill junction in Chicago.

Illinois Department of Transportation was recommended for a $US 132m grant for a group of projects known as the 75th Street Corridor Improvements and Argo Connections, which are the largest part of the Chicago Region Environment and Transportation Efficiency (Create) scheme.

The group of projects recommended for the Infra grant include:
• the north-south Forest Hill flyover to eliminate conflicts with east-west train movements
• the 71st Street Grade Separation scheme, and
• the Argo Connections component to improve connections at the Argo and Canal junction, address the 87th Street chokepoint, and increase capacity at Argo yard.

The project will reduce conflicting movements and will relieve congestion for more than 2 million freight wagons per year.

The Ohio Rail Development Commission was recommended for a $US 16.25m grant for the Ohio River Rail Improvement Project to upgrade about 48km of track along the banks of the Ohio River and improve capacity at two rail yards along the line.

USDOT secretary Ms Elaine Chao sent a letter on June 5 to the US House Committee on Transportation and Infrastructure, as well as the Senate Committee on Environment and Public Works giving notice for the projects to be awarded and the proposed grant amounts.

Illinois Department of Transportation (IDOT) awarded $US 241m in grants to 23 state freight projects on June 5, including $US 49.9m for a Create project in Chicago.