GERMAN intermodal operator European Cargo Logistics (ECL) has expanded its services between the port of Lübeck and Duisburg to accommodate lorry semitrailers that cannot be loaded by crane, using a unique parallel loading and unloading system developed by CargoBeamer, Germany. 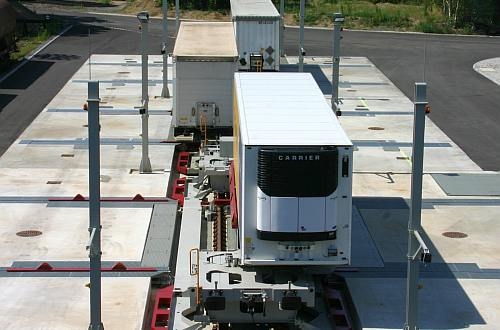 At the terminal, the lorry drives onto a specially-developed loading pocket (pictured below), which transfers the semitrailer laterally. The tractor unit can then leave the terminal, even if the train has not arrived. When the train reaches the terminal, freight can be loaded and unloaded simultaneously, and according to CargoBeamer a 36-wagon consist can be handled in just 15 minutes. This allows semitrailers that cannot be lifted by conventional cranes to travel by rail, and because all moving equipment is installed below solebar height, the system can operate on electrified sidings without interfering with catenary.

ECL's Ruhr Shuttle service runs six times a week in each direction, and each train will now include CargoBeamer wagons.