GERMANY’s minister for transport and digital infrastructure Mr Alexander Dobrindt has introduced draft legislation aimed at banning the operation of freight wagons which are deemed to be too noisy. If approved, the ruling would come into effect after the end of 2020. 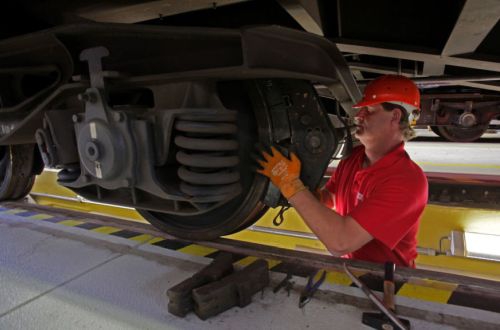 Germany’s Pro-Rail Alliance has welcomed the initiative. “It is important that this law finally brings relief to the noise-plagued people who live near railway lines,” says Mr Dirk Flege, the alliance’s managing director. “The Pro-Rail Alliance has for years been committed to completely upgrading the rail freight wagon fleet to cut noise levels, and supports the target of halving rail noise by 2020,” Flege says.

The alliance believes the legislation is long overdue because German freight wagon owners, who have invested considerably in retrofitting low-noise brakes, require legal certainty. “A strict and unequivocal ban on noisy freight wagons in Germany is the rail sector’s stated wish,” Flege says.

However, the alliance criticises exemptions in the draft legislation intended to avoid conflicts with European Union (EU) law. Although there is to be a general ban on noisy freight wagons, they could be allowed to operate in exceptional circumstances by limiting their speed. “The draft legislation is trying to achieve a reduction in the noise burden on local residents without coming into conflict with EU regulations,” Flege says. “This is a balancing act that could have unpleasant side-effects. Speed limits on freight trains with noisy wagons will reduce noise emissions but that will cause congestion on the network.”

The alliance fears this would make rail freight inefficient, particularly on busy main lines, to the benefit of road freight, which the alliance says already enjoys policy advantages. “Of course, it cannot be the aim of noise abatement policies to cause a shift of freight onto trucks, increasing noise levels on the roads,” Flege says.

The alliance wants the transport ministry to seriously re-evaluate the exemptions. “A clear ban on noisy freight wagons without the highly complex exemption rules, which will clearly disadvantage rail freight transport, would be the best solution,” Flege says. “If EU regulations mean that German legislators cannot completely exclude noisy wagons from the German rail network, the transport ministry should include other measures to effectively deter noisy freight wagons without having slow trains congesting the system.”

One idea would be to impose a levy in addition to track access charges for operating slow freight trains, which would take into account the extra work required for drawing up the timetable. “At the same time, the German government should strive for an EU-wide ban on noisy freight train wagons after 2020, doing away with the need for complicated national exemption rules.”