A lack of electrification on German cross-border rail routes is making it difficult for rail to compete with heavy goods vehicles (HGV) for a bigger market share of international freight movements through the country, the Berlin-based Pro-Rail Alliance (APS) says. 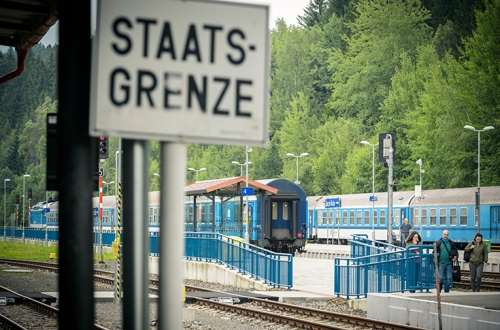 The station at Bayerisch Eisenstein in Bavaria, which connects Germany and the Czech Republic, is one of 13 unelectrified stations on the border.

According to an APS survey of the 57 border crossings that connect Germany’s rail network to all of its neighbours, only 25 are electrified. The share of electrification of the lines that cross international borders is 44%, compared with 60% for the rest of the German network.

Of the 24 crossings on Germany’s eastern border, only four are electrified, according to APS.
“Long-distance freight trains are hauled by electric locomotives but out of 10 border crossings with Poland, only one is electrified,” says Mr Dirk Flege, APS managing director.

“And of the 14 rail routes to the Czech Republic, again only one is electrified. So it is no wonder that huge numbers of east European HGVs flood Germany’s motorways every day. Without the electrification of the rail freight network, the flood of HGVs cannot be stopped.”

APS says the economic viability of freight trains is at its highest when large volumes of goods are transported over long distances. But with 50% of the freight on Germany’s railways heading for international destinations, it says the lack of electrification at border crossings is forcing freight trains, particularly those from Eastern Europe, into bottlenecks which make it impossible to achieve any significant modal shift from road to rail.