THE Swiss Federal Council has approved a scheme to create and finance a project which will allow 4m corner-height semitrailers to be carried on the Gotthard line. 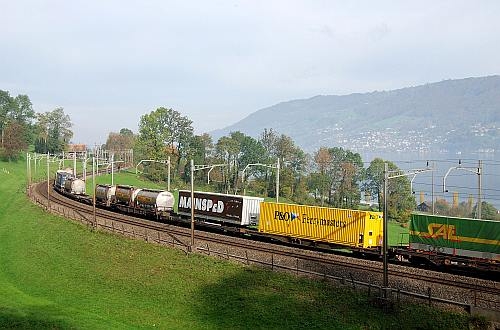 The SFr 940m ($US 960m) scheme is an important component of the Swiss modal shift policy, and will involve upgrading 20 tunnels on the Basle – Gotthard – Chiasso/Luino route together with signalling and catenary alterations and adjustments to platform canopies at stations.

The largest part of the project will be gauge clearance in the Boxberg tunnel in Aargau canton, which alone is expected to cost SFr 350m.

As part of the project, the Swiss government will also finance the gauge enhancement of the Luino Ranzo – Gallarate/Novara line on the Italian side of the border, which is regarded as essential to the overall project. A SFr 230m loan will be made available to the Italian government for these works.

The gauge enhancement works will complement the construction of the Gotthard Base Tunnel, which is due to open in 2016 and the Ceneri Base Tunnel, scheduled to open 2019. The project is due to be completed in 2020 and is expected to result in an extra 160,000 semitrailers crossing the Alps by rail each year.

At present the only 4m rail corridor though Switzerland is the Lötschberg – Simplon route, where capacity is almost exhausted.