Hupac and CRRC to cooperate on wagon production

SWISS intermodal operator Hupac has signed a supply contract with CRRC for new 19-metre flat wagons, which will be developed by Hupac and manufactured by CRRC. 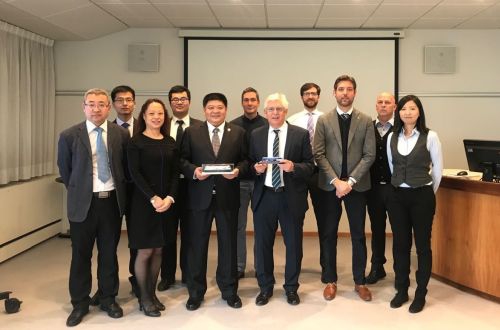 Under the two-year supply contract, the Chinese company will also carry out EU certification and wagon registration with the Swiss Federal Office of Transport (FOT). CRRC subsidiary CRRC Shandong will be responsible for the design, manufacture and certification of the wagons.

The contract, which was signed in Chiasso on November 8, marks CRRC’s first move in to the Swiss market after having already exported freight wagons to France, Poland, Germany and Britain. After the signing ceremony, the two companies held talks on cooperation and shaping the future of intermodal transport in the fields of maintenance, leasing of rolling stock, and close cooperation on One Belt and One Road initiatives.

As well as being market leader in Europe, Hupac has been active in the Chinese rail transport market for nearly a decade, with its own subsidiary in Shanghai since 2015. It recently launched the "Xin Ou Di"- Xinjiang China to Europe to Mediterranean - an international freight train for a Chinese chemical producer, which links the European railway network with mainland China.