Hydrogen-fuelled locomotive to be demonstrated in the United States

Chevron and Caterpillar to collaborate on demonstration hydrogen locomotive. 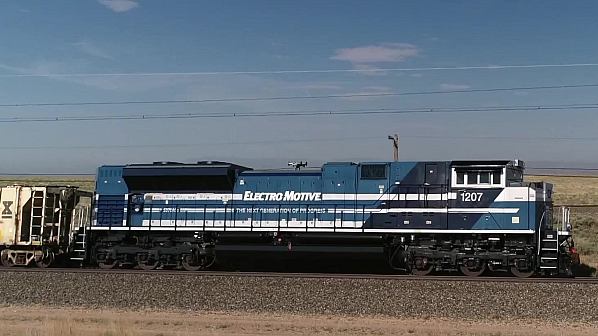 CHEVRON and Caterpillar have announced a collaboration agreement to develop a hydrogen-fuelled locomotive which will be demonstrated at various locations across the United States as part of a project to prove the feasibility of hydrogen-power for heavy-haul operation.

This is part of a series of demonstration projects in both transport and stationary power applications including prime power that the agreement covers.

The aim is to confirm the feasibility and performance of hydrogen for use as a commercially viable alternative to traditional fuels for line-haul rail and marine vessels and its use in prime power.

While hydrogen is viewed as an alternative power for local and regional passenger trains, it is usually rejected as unsuitable for high-speed and heavy-haul freight.

The locomotive trial will be facilitated by Progress Rail, a Caterpillar company, with the companies also agreeing to demonstrate associated hydrogen-fuelling infrastructure.

“Chevron is pursuing opportunities to create demand for hydrogen – and the technologies needed for its use – for the heavy-duty transportation and industrial sectors, in which carbon emissions are harder to abate,” said Mr Jeff Gustavson, president of Chevron New Energies.