THE two-month closure of the Karlsruhe - Basle Rhine valley line at Rastatt, Germany, and the immense problems it is causing railway transport on this key route has led Kombiverkehr, a leading European intermodal operator, to call for an immediate injection of €250m in aid from the German government. 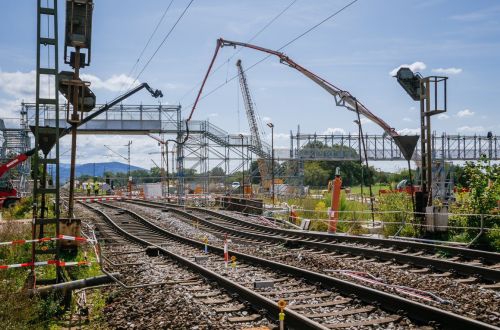 “We see a danger that the transalpine intermodal railway system, which has been built up over decades and functioned well for years and on which so many logistics companies have collaborated so effectively, will fall to pieces,” says Mr Robert Breuhahn, managing director at Kombiverkehr.

Kombiverkehr transports more than 350,000 truck consignments over the Gotthard and Brenner routes to and from Italy every year. It says the problem is made worse by the fact that alternative routes between Germany and Italy are plagued by lack of capacity and resources, border controls, poorly coordinated infrastructure works, and problems relating to line profiles and electrification.

Hupac, Switzerland, is also calling for action. The intermodal operator has released an open letter addressed to Germany and the EU Commission for Transport, and signed by 20 leading representatives of the European rail logistics sector, which points out the immense damage being done to this branch. It says that many trains have had to be cancelled, and while alternative routes by road or waterway can be used, they cannot meet demand.

“It is still unclear for many railway experts to understand why the total closure of the line could not have been avoided or significantly shortened by the building of a temporary, single track replacement line immediately after the damage of the Rhine valley line due to construction works,” the letter states.

The letter calls for various measures to be taken, including the creation of a task force at EU level for such eventualities, simplified operating procedures and short-term reinforcement of the driving pool.

The line, which suffered from subsidence caused by construction of a new railway tunnel beneath the existing track, is being completely rebuilt and is not due to re-open until October 7.

The new double-track line will bypass Rastatt with twin tunnels and was originally planned for inauguration in 2022 as part of the 182km Karlsruhe - Basle upgrading project to provide a four-track rail connection from central Germany to Switzerland and the new Alpine base tunnels. However, there are now doubts as to whether this will be possible because the damaged tunnel has now been filled with concrete. The second tunnel was not affected.