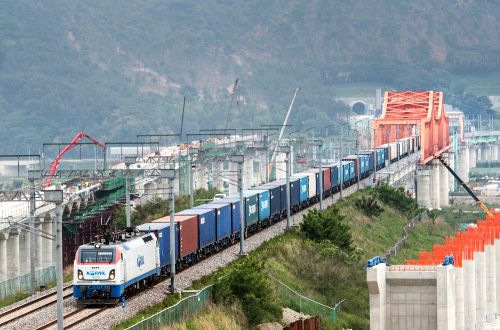 Korail says that it achieved the extended length by using a new remote control system which can increase freight train capacity by up to 240%.

According to Korail, two locomotives are required for freight trains longer than 40 wagons, and delayed braking propagation can hamper the operation of trains formed of up to 80 wagons. To overcome this issue, Korail has worked with Korea Railroad Research Institute and Hyundai Rotem to develop an electronically-controlled braking system which enables the driver to simultaneously apply the brakes from both the manned lead and unmanned rear locomotive.

The new system has been developed under a memorandum of understanding signed by the partners in the project in March this year. Hyundai Rotem designed the data and remote vehicle logic system, while KRRI was responsible for installing the system and transponders.