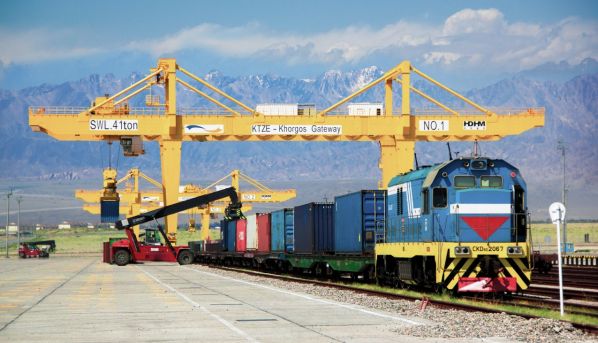 The limit on the number of Kazakh trains accepted at the Chinese border has now increased to 14 trains daily in each direction, following a digital meeting with representatives from China’s North Xinjiang Railway. The Kazakhstani representatives had initially proposed an increase to 18 trains per day per direction.

The number of freight trains travelling from Kazakhstan to China which were accepted at the border was reduced from a daily average of around 15-16 trains to around 10-11 per day following the implementation of restrictions by China intended to reduce the spread of Covid-19.

The restrictions included a mandatory a 14-day quarantine for all visitors to China. China also reportedly planned to reduce their acceptance of freight wagons by half in December, from previous declared volumes of around 1,635,000 tonnes to around 992,000 tonnes.

In response, KTZ Cargo heavily restricted its China-bound freight through the Dostyk-Alashankou crossing, saying that the restrictions prevented its employees from carrying out their work, and that the delays caused by the measures had caused a rising “number of claims from shippers for violation of freight delivery terms,” causing it to incur “serious losses.”

Between November 23 and 30, the loading of all freight except open wagons, containers and bagged freight was prohibited, with the transport of all non-containerised freight subsequently restricted between November 24 and December 4.

KTZ Cargo subsequently reported a backlog of around 12,000 wagons waiting to cross the border, with a further 9600 wagons reported as inactive as of December 1. KTZ Cargo is cancelling fines for freight companies which violate its loading plan.

The situation was exacerbated by persistent adverse weather conditions at Dostyk freight terminal on the Chinese border, which prevented loading and loading from taking place. Rail freight to and from China must be transferred between 1520mm-gauge Kazakh and 1435mm-gauge Chinese tracks.

In response, KTZ Cargo has set up an emergency operation headquarters to resolve the issue and is petitioning the Kazakhstan government to arrange a meeting of its intergovernmental commission with China to resolve the crisis.

Additionally, KTZ says that it is preparing a draft appeal to the chairman of China National Railways, co-signed by the heads of the Kazakh, Belarusian and Russian railways.