LITHUANIAN Railways subsidiary LG Cargo, PKP Cargo and CargoBeamer have operated a pilot intermodal train from Germany to Lithuania, the first such service to reach the Baltic States. 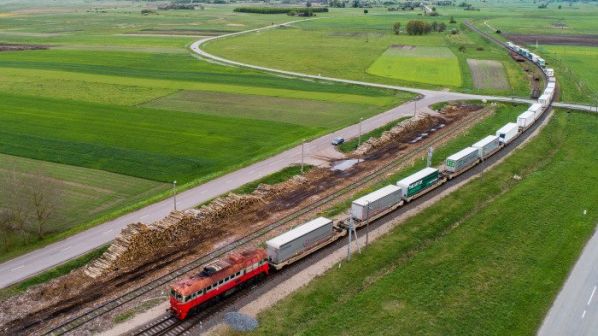 RZD says it has already successfully tested the technology.

The 22-wagon train arrived at Sestokai terminal in southwest Lithuania on May 14 following a two-day 1500km journey from Kaldenkirchen Intermodal Terminal, close to the German border with the Netherlands.

Trailers from eight transport and logistics companies - Girteka Logistics, Vlantana, Hoptransa, A Gricius’s, DSV, Arcese, Solotransa and Nokvera - were loaded onto CargoBeamer wagons. The train used the standard-gauge line from Poland to Sestokai. At Sestokai, the trailers were reconnected to tractor units for completion of the final leg of the journey to the final point of unloading.

A further 23 trailers were transported on the return leg to Kaldenkirchen, for a complete round trip of around 3000km.

LG Cargo CEO Mr Egidijus Lazauskas, says the trial emphasises the environmental friendliness of rail freight - the train is estimated to have reduced CO2 consumption by 100 tonnes compared with an equivalent road journey. Equally, PKP Cargo CEO Mr Czeslaw Warsewicz says the train shows the capabilities of services between Lithuania and Poland to western Europe to compete with road.

“This route is currently dominated by road transport and we want to change this unfavourable structure,” Warsewicz says. “Therefore, together with our partners, we are working on preparing a competitive transport offer.”