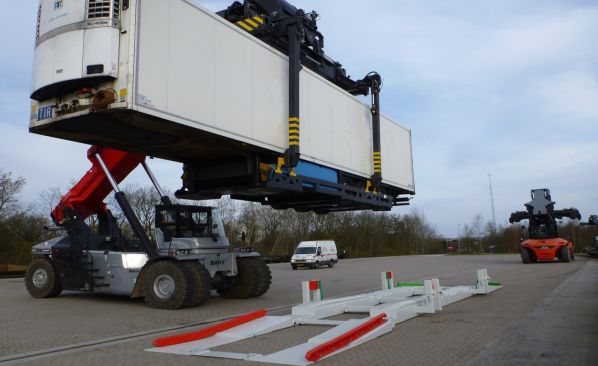 The trailer, on the NiKrasa transport platform, can be lifted by a gantry crane or reach stacker.
Photo Credit: TX Logistik

A direct intermodal service connecting Barking in east London with Cologne is due to be introduced in September, initially operating three times a week.

The service is being launched by TX Logistik, part of Italian State Railways' (FS) freight company Mercitalia, and Ecco Sped, working with other partners that include Eurotunnel.

The service will be able to carry semitrailers using the NiKrasa system, which allows non-craneable semitrailers to be loaded onto pocket wagons without the need to adapt wagons, trailers or terminal facilities.

According to TX Logistik, 90% of road semitrailers cannot be lifted using cranes.

The semitrailer is loaded into a NiKrasa tub using a reach stacker, which can then load the tub and trailer on the pocket wagon.

TX Logistik uses the system on intermodal services from Herne in Germany to Verona and is keen to provide a connection to Britain for its route from Italy to Cologne.

The new service will be operated by DB Cargo UK from Barking to Calais via HS1 and the Channel tunnel, and from Calais to Cologne by Lineas.