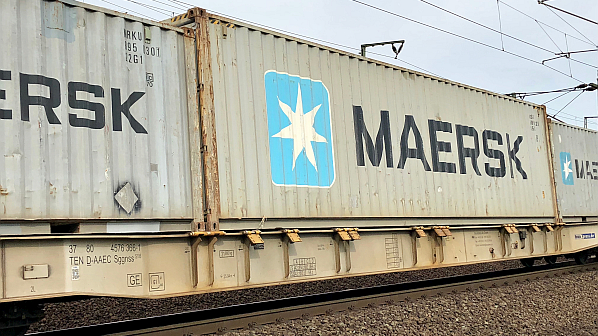 INTERNATIONAL shipper Maersk has temporarily suspended new intercontinental rail bookings without exception on both east and westbound services between Asia and Europe until further notice.

Maersk said in a statement on March 4 that as the crisis in Ukraine continues and governments impose new sanctions on Russia and its allies, and that following careful consideration, it has decided to establish new and revise existing processes, which include accepting and handling bookings for Belarus.

Maersk said that in future only bookings for food, medicines and humanitarian supplies will be accepted following extensive screening. Maersk also confirmed that it could not engage with, receive from or make payments to any sanctioned banks or any other sanctioned party including Belarusian and Russian parties.

Following the introduction of sanctions by various governments, a decision was also taken to suspend new intercontinental rail bookings between Asia and Europe. Maersk says that if cargo is already in transit or if a booking was completed before March 4, then the plan was to try to ensure that it would be delivered.

Maersk also suspended all new air bookings to Russia and Ukraine and says there is a potential risk to the cost of air transport.

An RCG spokesman told IRJ on March 10 that RCG transported approximately 4.4 million tonnes to and from Ukraine in 2021. He said that the operator is in constant contact with all relevant partners and authorities to monitor the situation.

The spokesman also told IRJ that Eurasian trains are currently being diverted via Belarus and Poland but that an alternative route from China via Turkey is being “worked on.” There are understood to be concerns regarding capacity on that route.

Following the introduction of sanctions, the Vedomosti Russian news website reports that Russian Railways (RZD) has switched to a 100% pre-payment system for freight traffic.

Reports state that RZD has stopped working with bank guarantees provided as security and has switched payment methods.

The reports also suggest that the volatile state of the financial markets mean that deferred payment for shippers will also be temporarily unavailable.

Reports by Interfax claim that for the first two months of 2022 international traffic volumes through Russia increased by 0.8% to 94.5 million tonnes.

The Vedomosti website also reports that the Russian government is planning to “arrest” wagons from “unfriendly states”. This means up to 12,000 wagons could be detained in Russia and is thought to affect rail vehicles from Ukraine, Latvia, Lithuania and Estonia. The website reports that the measures are being introduced to protect the Russian economy. Logistics cooperation with Baltic states will also be reduced.