ITALIAN State Railways’ (FS) freight subsidiary, Mercitalia Rail, and its subsidiary TX Logistix, have agreed to purchase up to 125 new-generation Traxx DC3/MS electric locomotives from Bombardier for a total investment of around €400m, while Mercitalia Rail and Cemat will purchase 250 freight wagons at a cost of €27m. 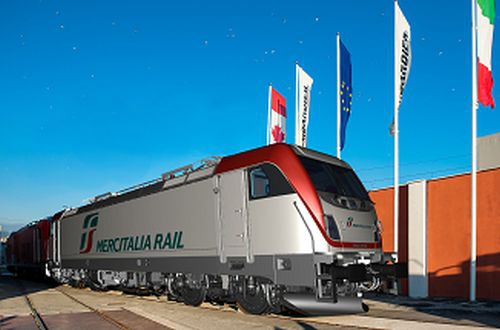 The locomotive deal, which includes maintenance for eight years, was concluded after what Mercitalia Rail describes as a very tight, eight-month competitive tender involving the major international suppliers. The order should also help to secure the future of Bombardier’s Vado Ligure factory near Genoa.

The locomotives will have a maximum output of 6.4MW and a tractive effort of 320kN, enabling to haul heavier freight trains than is currently possible. The units will have regenerative braking to reduce energy consumption. Delivery will start in autumn 2018.

Two types of freight wagon have been ordered. Tatravagonka Poprad, Slovakia, will supply 50 double-pocket wagons, designed for the transport of mega semitrailers, which will enter service in the early 2018, while Greenbrier will supply 200 coil wagons for operation starting in summer 2018.

The wagons will be equipped with a telematic monitoring system consisting of self-powered sensors which will use an innovative energy harvesting system capable of communicating the wagon’s condition in real time.

Mr Marco Gosso, managing director of Mercitalia Logistics, says these contracts represent an important part of the 2017-2026 FS Industrial Plan, which includes a €1.5bn investment in Mercitalia Rail. “Our goal is to use these new locomotives and wagons to improve freight services in Italy, the Transalpine Corridors and major European countries,” Gosso says.

The locomotive order will allow Mercitalia to renew more than a third of its fleet over the next three years by which time it will have one of the newest electric locomotive fleets in Europe.