MEXICO's railway network carried a record 108 million tonnes of freight in 2011, of which 6.9 million tonnes was intermodal traffic. Rail had a 26% modal share of the freight market, with volumes increasing 3.7% from the 104 million tonnes transported in 2010, well above projections for a 3% increase during the year. 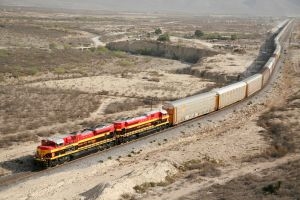 Volumes reached nearly 80 billion tonne-km in 2011, double that recorded before railways privatisation in 1995. Mexico's largest freight operator, Mexican Railways (Ferromex) increased its volumes by 6.6% and revenue by 13.9% during the year, while the country's second largest freight operator, United States Class I Kansas City Southern (KCS), reported a 15.9% rise in volumes during the first three quarters.
While a lack of investment in the rail network in the final years of Mexican State Railways hampered development in the early years of privatisation, railfreight volumes have increased 106% overall since privatisation following investments in infrastructure that have improved reliability. And with Mexico's GDP growing as the country increasingly rivals China and East Asia as the preferred manufacturing base for exports to North America, it appears this upward trend will continue.
KCS president and CEO Mr Dave Starling told IRJ's sister publication Railway Age in January that Mexico has been the catalyst for the operator's growth over the past few years, accounting for 46% of the company's current revenues.
KCS already serves nine automobile factories in Mexico, and with four more plants opening soon, as well as expansions of ports at Lazaro Cardenas and Hutchison Port Holding's facility, Starling believes this will increase to over 50% in the future, as KCS realises the potential for further growth.
"It's our transportation pipeline," Starling says. "China to Chicago takes about 25 days. But if you manufacture something in Mexico you are going to be there in five days.
"There are 2.6 million lorryloads that cross the border every year into territories that KCS serves. We have less than 2% of that market, so we call intermodal and Mexico the last frontier. That is the big opportunity for conversion and that is what we are focusing on now."
Categories: Central/South America, Freight, News
Tags: Ferromex, Kansas City Southern KCS, Mexico