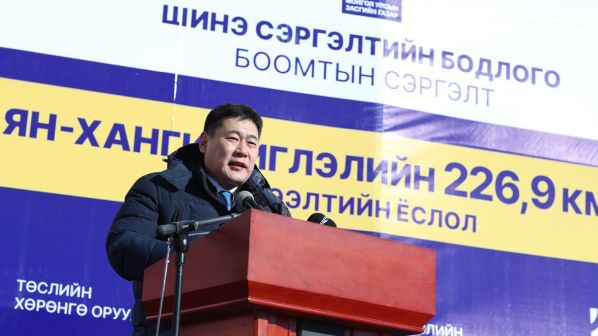 Construction of the line took just eight months to complete after work got underway in March. The new 1520mm-gauge line follows the opening of the Tavantolgoi - Gashuunsukhait line in September and the Soviet-era Subataar - Zamli-Uud line, which runs for 1815km north-south from the border with Russia to China and is operated by Ulaanbaatar Railway (UBTZ).

The new line will connect the under construction west-east 416km Tavantolgoi - Zuunbayan railway, which is expected to open by the end of this year, with the Khangi-Mandal border crossing as well as support a key industrial facility at Sainshand, which is located on the UBTZ line northwest of Zuunbayan. Work is underway in China on a new railway to connect with the border crossing at Khangi, providing a through route for freight traffic to Inner Mongolia and beyond.

The line is expected to increase Mongolia’s import-export freight capacity by 20 million tonnes. It will also cut the transport distance for freight in half, providing a boost to exporters of coal, copper and iron ore from Mongolia’s mineral-rich southern region, which have traditionally had to rely on road transport, severely limiting their output.

By using the Khangi-Mandal border crossing instead of Zamil-Uud, the new line will cut the distance of transporting goods from Yuruu in northern Mongolia to Bugat in China by 306km, reducing the cost of shipping iron ore by rail from $US 8 to $US 4 per tonne, according to The Financial Times.

The new line combined with the Tavantolgoi - Gashuunsukhait line is expected to increase Mongolian rail freight traffic by 65%.

“The new Zuunbayan - Khangi railway was built in just eight months through a public-private-partnership investment model and is Mongolia’s new gateway for transporting mining export products competitively to the global marketplace,” Oyun-Erdene said during the inauguration ceremony.

“Today’s opening marks a major milestone in the government of Mongolia’s New Recovery Policy, which is focused on strengthening the country’s economy following the pandemic and making Mongolia into a leading Asian country by 2050.”

For an in-depth report on Mongolia’s railway expansion, see the October issue of IRJ, p36. Digital subscribers can read the article here.