AUTOMOBILE logistics group Mosolf announced on March 15 that it has reactivated rail freight traffic to its site in Düsseldorf, Germany, five years after they were withdrawn. 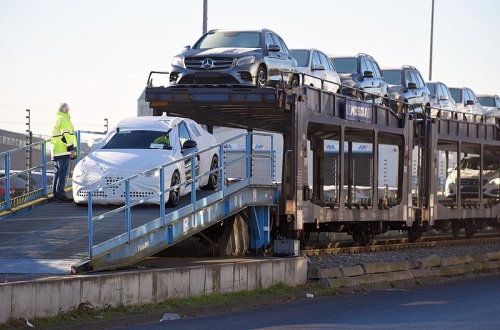 Following successful tests carried out in January, which showed that reactivating its railway siding was feasible, there will now be a weekly rail departure from Mosolf’s site in Kippenheim, south Germany, to Düsseldorf.

Over 67,000 vehicles were handled at the port of Düsseldorf last year and the company is aiming to transfer over 70,000 in 2017. Inland waterway vessels will transport 49% of the vehicles, while 34% will be handled by lorries, with the remaining 17% will now be transferred by rail.

Mosolf says the decision supports the company’s objective to switch traffic from road to more sustainable methods of transport, including rail. The new schedule means that over 12,000 vehicles can be transported between the Black Forest and the Rhineland district by rail each year. A local transport fleet of 40 vehicles handles last mile delivery to customers in and around Düsseldorf.

“In addition to the environmental benefits of rail services compared with trucks - after all, a block train with 250 cars is roughly the equivalent of 35 truckloads, depending on the load factor - the concept also makes sense from a logistical point of view,” says Mosolf chief sales officer, Mr Wolfgang Göbel. “The prompt, regional deliveries by the routes from Düsseldorf also enable more efficient and faster vehicle distribution.”