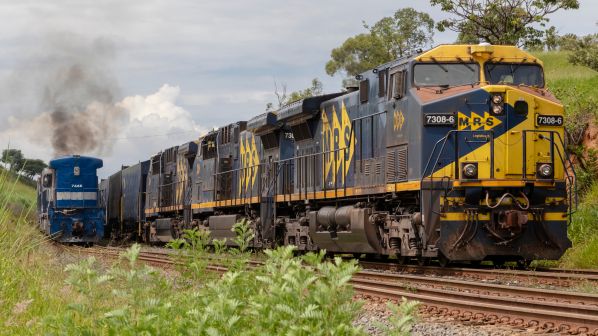 MRS Logistics has signed a 30-year concession that will run until 2056.
Photo Credit: Shutterstock/Ariadne Barroso

BRAZILIAN freight railway MRS Logistics has signed a new 30-year concession to operate and maintain its 1643km railway in the states of Minas Gerais, Rio de Janeiro and São Paulo. The deal includes investment of Reais 11bn ($US 2.13bn) in the network, which the railway says will help to improve productivity and diversify its freight traffic mix.

The new concession agreement, which was signed on July 29, will commence in November 2026 and central to its development is the MRS Investment Plan, which was conceived together with the Ministry of Infrastructure (MInfra) and the National Land Transport Agency (ANTT). The plan is based on three pillars: capacity expansion and compliance with performance parameters, investment in the public interest, and work to minimise the impact of rail operations in urban area.

Work will include the construction of four new intermodal hubs at Mooca and Lapa in São Paulo, Queimados, Rio de Janeiro, and Igarapé, Minas Gerais, that will improve rail access in the southeast of Brazil. MRS hopes to double the volume of general freight, which includes industrialised products, construction materials, steel, and agricultural products, and increase intermodal volumes by seven times.

The Reais 11bn investment includes Reais 6.2bn for capacity expansion and performance improvement, among which are the construction and expansion of yards, remodelling of the permanent way and support facilities, and the acquisition of locomotives, wagons and equipment to support the growth in demand and the performance parameters determined by the government.

A further Reais 3.7bn is allocated for work deemed in the public interest, such as investment to improve urban transport, increase inter-modality and reduce logistics costs, such as the segregation of lines also used by the São Paulo Metropolitan Trains Company (CPTM). A further Reais 1.1bn will be spent on projects in urban areas to reduce conflict with road traffic and improve safety, including the construction of viaducts, underpasses, footbridges and fences.

In addition to the new investment, MRS is obliged to pay 138 quarterly instalments of Reais 14m which will be added to the existing quarterly payments for the right to run the concession until 2026.

In total, MRS is expected to make Reais 31bn in investments up to 2056.

The Ministry of Infrastructure has chosen to reduce railway access charges in the Baixada Santista area on the coast of São Paulo state, which includes the port of Santos. MRS investment in the area since the beginning of the company's activities in 1997 have resulted in a more than 10-fold increase in the volume transported by rail to the largest port in Latin America. In 1997, 5 million tonnes were carried, and in 2021 this amount reached 51 million tonnes.

These volumes are expected to more than double during the next concession, reaching an estimated 109 million tonnes in 2056. As well as its own increase in traffic, the MRS investment plan considered the expected increase at other concessionaires and based on this data provided by ANTT designed the necessary solutions to optimise rail flows in and out of the port. MRS will invest more than Reais 1bn to guarantee this capacity is provided.

The MRS network accounts for 6% of the total Brazilian railway system but carries around a third of its total freight traffic.

“On behalf of the entire MRS board, I am immensely grateful to the technical staff of ANTT, MInfra, TCU and other bodies,” says MRS president, Mr Guilherme Segalla de Mello. “It would not have been possible to get here without the help of these technicians and our teams, who were extremely technical and competent. Now we have a great challenge to fulfil, and we will fulfil everything we have committed to.”