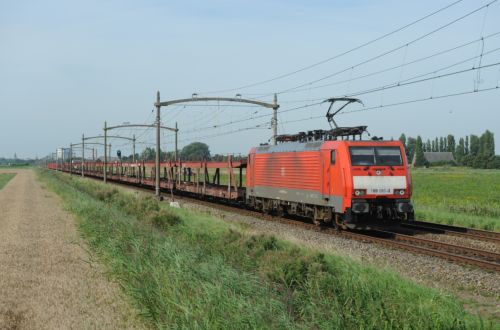 The trial will take place at the end of August with the train of car transporters running from the port of Sloehaven near Vlissingen in the south west of the Netherlands to Dillingen, near Saarbrücken, These train runs via the so-called Brabantroute via Breda and Eindhoven, crossing the Dutch- German border via the Venlo - Kaldenkirchen crossing.

Prorail studying various operational scenarios to ensure traffic control and dispatching staff are prepared for the potential effects on traffic and able to minimise the risk of disruption in the event of a problem. The impact on level crossing waiting times is also being evaluated.

The trial is being carried out within the framework of an agreement between the Dutch Ministry of Infrastructure, Prorail rail and Dutch rail freight operators.

The agreement is intended to improve rail freight’s ability to compete with other modes and boost rail-borne volumes. The government aims to increase rail freight volumes from 42 million tonnes in 2016 to 54-61 million tonnes by 2030, and plans to provide a grant of €12-14m per year between 2019 and 2023 to bring track access charges in line with those of neighbouring Germany.