The East-West Gate terminal is equipped with cranes controlled remotely by 5G technology to aid speed of transhipment. 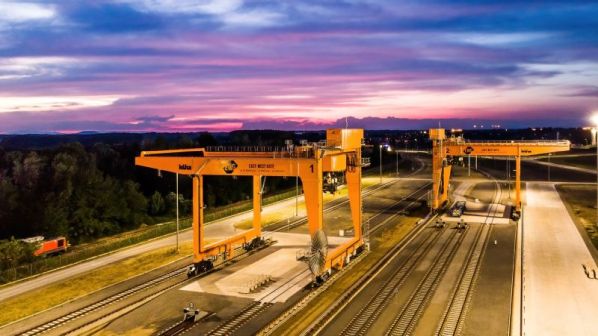 A view over the East-West Gate terminal with its cranes controlled remotely by 5G technology.
Photo Credit: János Tálosi Linked in

A new intermodal terminal which promoters say is “Europe’s largest and most modern green concept” facility has been opened at Fényeslitke, close to the Hungarian-Ukrainian border, following a private investment of Forints 40bn ($US 94.8m).

The East-West Gate (EWG) terminal is located at a junction between Hungary’s 1435mm and Ukraine’s 1520mm-gauge rail lines, south of the border crossing point of Záhony. The facility has capacity to handle up to one million 20ft containers per year. The terminal will load truck and conventional road semi-trailers onto rail, as well as provide trans-shipment of wagons between the two gauges.

EWG is said to be the first in Europe where control of its cranes can be carried out remotely using 5G technology. The terminal has a 41m-wide and two 28m-wide giant cranes on rails, as well as a 20m-high rubber-tyre crane. The cranes, supplied by Austrian company Künz, are equipped with 20 high-resolution cameras, which, with the help of 5G, can be viewed in real time at the centre of the terminal and then controlled as if the operator were in the crane’s cabin. The private 5G network was built by Vodafone Hungary and the network equipment was supplied by Huawei.

EWG's cranes are ATEX and ADR certified, so they can also trans-load special materials such as gas container tanks and chemicals, aiding the environmental goal of encouraging a shift from road to rail freight transport to meet European climate objectives.

EWG also had significant capacity for transhipment of agricultural products, providing a useful outlet for Ukraine’s significant exports of produce given the current war situation. From next month it is expected to be capable of handling 800 tonnes of grain and 450 cubic metres of sunflower oil per hour, making it the largest rail hub for Ukrainian food exports. Indeed, the first train carrying Ukrainian agricultural goods rolled into the terminal during the handover ceremony. Its load comprised 1146 tonnes of wheat, millet and green peas shipped by Ugrain Trade LLC in 44 20ft containers which, after transhipment, were destined for the Csepel Free Port near Budapest.

A 1500m2 warehouse is also available for those using the terminal and there is the possibility of building additional loading and assembly facilities on the 140-ha site.

Construction of EWG began in January 2021 on an 85ha site and a total of 10km of standard gauge and 1520mm gauge track and 225,000m2 of concrete paving were laid. EWG received its railway licence from the Hungarian National Transport Authority in June after a successful technological and technical trial run, which started in March of this year and lasted several months. EWG is also said to have created around 100 new jobs.

"With the construction of the East-West Gate, Hungary is back on the map of international rail logistics," says CEO of the investor East-West Intermodal Logistics, Mr János Tálosi. “EWG is independent and its services are available to any rail and road freight company in the world, open to all freight forwarding operators and carriers."

The Hungarian government has committed Forints 12.4bn to improving rail infrastructure around EWG as well as the Záhony Wide station. Hungarian Railways (MÁV) is constructing 2970m of new 1520mm-gauge and 4618m of 1435mm-gauge track in the area as well as upgrading 18 sidings and upgrading existing track.