SWEDISH rail freight operator Green Cargo is set to begin the use of XXXL containers supplied by Innofreight, Austria, to transport wood chip to Soderenergi’s fuel terminal in Nykavn, a move which is reducing the number of trains the operator requires to deliver the same quantity of product. 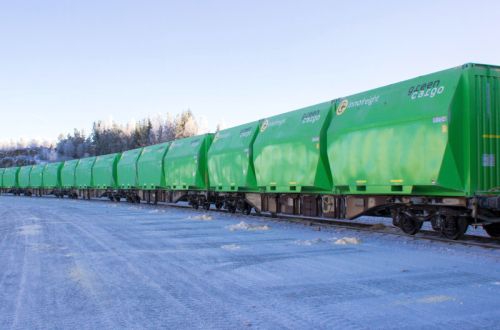 Green Cargo’s trains for Soderenergi will now consist of double locomotives and 27 wagons which are transporting 81 XXXL containers, which equates to 1600 net tonnes of fuel per train. The load volume of the operator’s trains will increase to about 4500m3, compared with 3500m3 using a train consisting of 27 wagons and 81 XXL containers, which Green Cargo used to transport fuel to Nykavn from 2014 to 2017.

“For Soderenergi, this is a step in the right direction, toward increased sustainability,” says Mr Olle Ankarling, head of logistics at Soderenergi. “With larger containers, we’ll be more flexible, reduce the number of trains by 25%, and be more cost-effective. This means we’ll also promote traffic reduction on an already heavily-burdened rail network, freeing up track capacity.”

Green Cargo is set to transport wood-based and refuse-derived fuel to Nykavn from Tova, Ostavall, Ange, Bastutrask, and Ornskoldsvik in 2018. “A container upgrade gives us better matching between the total weight and the total volume we are transporting by this system,” says Mr Johan Lorensson, Green Cargo sales executive.