STATE secretary for Norway's Ministry of Transport and Communications Mr John-Ragnar Aarseth visited Rombak station in the Arctic Circle on September 17 to mark the completion of a project to increase capacity on the 43km Norwegian section of the heavy-haul line linking iron-ore mines in the Kiruna area of northern Sweden with the port of Narvik. 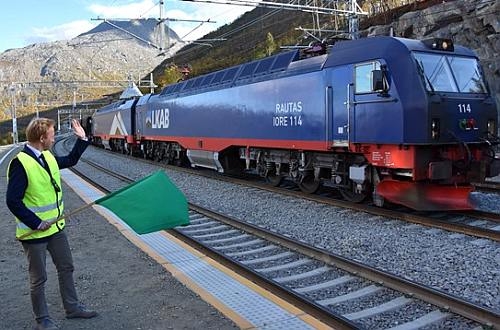 The expansion is part of a broader programme of enhancements including new loops at Bjørnfell, Katterat, and Straumsnes, which has increased capacity by 30%. The loops at all four stations now accommodate 750m-long iron-ore trains, mirroring developments on the Swedish section of the line.

Aarseth congratulated infrastructure manager Jernbaneverket and contractors for completing the project at Rombak a year ahead of schedule. "When we consider the fact that the construction season here is limited to a few hectic weeks in the summer it is impressive that this has already been completed."

Preparatory works will begin next month on new passing loops at Djupik east of Narvik and Jernbaneverket is also carrying out major renewals of the line's catenary.

According to a recent study commissioned by Swedish infrastructure manager Traffikverket, the number of iron-ore trains running to the port of Narvik is forecast to rise from 20 to 44 per day by 2020, while conventional freight traffic is expected to increase from eight to 12-26 trains per day. The number of daily passenger trains could also double from six to 12 trains per day.

In order to accommodate this growth both Jernbaneverket and Trafikverket are developing long-term plans for track-doubling on the Kiruna - Narvik line.