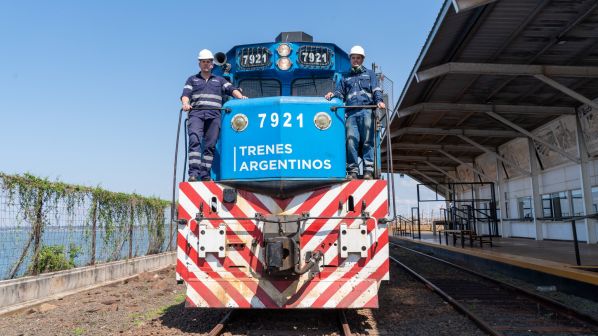 Argentinian Freight Trains (TAC) locomotive No 7921 after arrival at Encarnación in Paraguay on September 6 with the first freight train to make the border crossing for seven years.
Photo Credit: Trenes Argentinos Cargas (TAC)

PARAGUAY and Argentina are reconnecting their rail networks to carry freight over a 1200km route which also connects to Uruguay and borders Brazil - but there could also be opportunities to expand the freight network to connect with other countries.

The 1435mm-gauge Urquiza and Mesopotámica networks in Argentina together form a rare example in the Americas of the same gauge connecting four countries (although a change to metre-gauge wagons is needed for the border crossing into Brazil). The cooperation between the Paraguayan and Argentinian rail authorities which on September 6 saw a freight train crossing the border from Argentina and running through to Encarnación in Paraguay could herald the beginning of greater logistical integration in that region of South America.

The Argentinian Freight Trains (TAC) train was the first to make the border crossing from Argentina into Paraguay for seven years, once again crossing the bridge linking Posadas with Encarnación as part of the Transport Modernisation Plan being carried out by Argentina’s Ministry of Transport under the direction of Mr Alexis Guerrera.

The reopening of the cross-border line was the result of agreements reached between TAC and Paraguayan Railways (Fepasa). It is expected that it will generate new flows of freight, reducing transport costs and shipping times as well as providing an opportunity for Paraguayan producers to export merchandise with added value, generating new foreign exchange earnings.

It was expected that in the following few days a fully-loaded train would set off on the return journey to Zárate, in the province of Buenos Aires, with wagons loaded with bagged rice for export. It is hoped that it will be the first of many such goods to cross the border by rail.

“This is excellent news for freight transport, and also one more example of where our agencies are constantly working to make international reconnections in strategic sectors a reality that boost regional economies,” Guerrera says. “It is also important to highlight the commitment of the railway staff to work together and manage to combine national actions with international ones, because we are all concerned with the same things, and because we are united by the same idea of developing a comprehensive transport system in all its different modes.”

The process of reopening the network began in July 2020 when, after two years out of service, trains again began running on the northern section of line between Santo Tomé in Argentina’s Corrientes province and Garupá in Misiones province. This allowed freight trains to make the complete journey between the capital of Buenos Aires and Misiones, providing encouragement for companies in the northern regions to switch to rail transport.

Now, two years on, 10% of total freight loads on the Mesopotámica line originate on the reopened part of the line. Further improvements on the Urquiza line meant that between 2020 and 2021 eight new freight clients switched to rail and the volume of goods transported went up from 25,000 tonnes per month to an average of 40,000 tonnes. At the end of August 2022, more than 50,000 tonnes of freight were being carried each month.

The railway now carries a diverse selection of freight, including agricultural products, stone, pine logs, containerised products such as cellulose pulp, and cement. This has been achieved despite two unexpected checks on progress - first the Covid-19 pandemic and then, in March of this year, forest fires which affected the line for two months and which resulted in the workforce having to be doubled to get the line operational again.

Now the reopening of the border crossing into Paraguay provides even greater opportunities for freight traffic expansion. “Reactivating this international crossing was a challenge we set ourselves from the beginning of our administration,” says president of TAC, Mr Daniel Vispo. “Minister Guerrera entrusted us with consolidating and expanding the freight rail system, especially the Mesopotámica line, and this is one more step that will open up new opportunities.”

“We want local and multinational economic players to have the railway as an alternative to transport their products and this is the initial step to consolidate new flows that will boost the region,” says head of Fepasa, Mr Lauro Ramirez.

The Intermodal Association of South America (Aimas) sees even greater opportunities for expansion in the future, as it believes that combining rail and road freight routes can serve a wider area of the continent.

If consideration is also given to adding the Salto Grande rail and road bridge, on Uruguay’s border with Argentina, to the rail rehabilitation programme that the government of Uruguay is currently undertaking, Uruguay, Argentina and Paraguay will once again be connected directly by rail. Road and river freight routes could be used for intermodal traffic to northern Chile, Bolivia and southwest Brazil, benefiting a total of six South American countries.