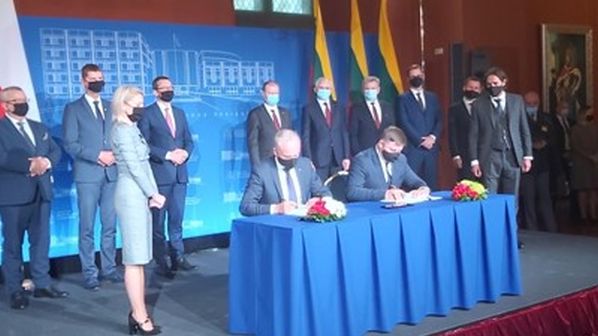 The agreement was signed during a Polish-Lithuanian government summit held in Vilnius on September 17.
Photo Credit: PKP Cargo

As well as rail services, the company will be responsible for last mile delivery and document processing. Under the agreement PKP Cargo is guaranteed to handle transport services in Poland offered from Lithuania.

Both company’s share capital in the partnership is worth Zlotys 1.3m ($US 340,000) with each partner holding a 50% share. The agreement was signed during a Polish-Lithuanian government summit held in Vilnius on September 17.

“This contract is an example of the implementation of PKP Cargo Group’s strategy where we strive to transform from a railway carrier into a logistics operator,” says Mr Czeslaw Warsewicz, PKP Cargo president.

Warsewicz adds that as well as TEUs, the operator is open to carrying lorry trailers on a rolling road service. Around 2.7 million lorries cross the Poland-Lithuanian border each year and transferring some of these loads to rail would have a positive impact on road safety and the environment in Poland.

“We have already carried out pilot transport of lorry trailers on railway wagons and they have produced satisfactory results,” Warsewicz says. “Customers are asking for such services because transporting a lorry-trailer by train instead of road is a more profitable solution.”