Routes to the ports of Gdańsk and Gydinia are dominant but east-west cross-border routes also handle significant tonnages. 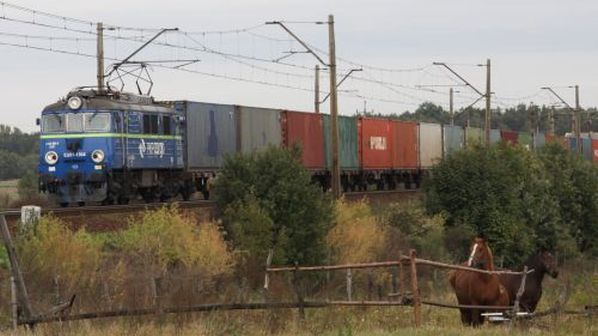 POLAND’S Office of Rail Transport (UTK) has revealed that 26.5 million tonnes of freight was transported by intermodal rail services in 2021 - 2.7 million tonnes more than in 2020.

The most important intermodal transport routes were those leading from the seaports of Gdańsk and Gydinia to Brzeg Dolny or Warsaw, and via the border crossings with Germany and Belarus.

UTK says that after a weaker 2020 for transhipment at Polish ports, intermodal transport was in high demand in 2021, with the volume of TEUs transported increasing by 8.9%.

In 2021 there were 43 intermodal terminals operating in Poland with a total storage area of 228,528 TEU and a declared annual throughput of more than 9.6 million TEU.

On Poland’s border with the Czech Republic, 1296 trains used the Bohumin Vrbice/Bohumin - Chałupki route, 647 trains the Zebrzydowice - Petrovice u Karviny route, and 87 trains the Lichkov - Międzylesie route. The number of direct intermodal trains to Poland’s southern border continues to be low - in the case of trains between Gdańsk and the border station of Zebrzydowice, only 101 trains in both directions were operated, mainly as part of the Paskov terminal service.

A total of 784 international intermodal trains were operated over the rail border crossings between Poland and the Kaliningrad region of Russia, with 603 trains using the Zheleznodorozhnyy - Korsze Towarowa route and 181 the Braniewo - Mamonowo route.

The important eastern border freight yard of Małaszewicze, close to the frontier with Belarus and where containers are transhipped from 1520mm gauge to 1435mm gauge wagons continued to play a dominant role in the transport of goods between Eastern European and Asian countries during 2021.

UTK statistics show that during the year 1643 direct trains from Małaszewicze and Chotyłów were operated westward further into the EU.

There is set to be a further increase in Poland’s international intermodal rail traffic in the future. In May 2021 the Polish Office of Competition and Consumer Protection (UOKiK) approved the creation of a joint venture (JV) between Polish freight operator PKP Cargo and Lithuanian freight operator LTG’s Polish subsidiary, LTG Cargo Polska, relating to intermodal freight transport. The JV plans to offer intermodal rail transport from Lithuania to Poland and then from both countries through to Germany and Italy. Operation of block trains for specific customers - such as those transporting hazardous goods - was also part of the JV.