GERMANY’s Pro-Rail Alliance has launched a stinging attack on a draft regulation issued by federal transport minister Mr Alexander Dobrindt allowing the unrestricted use of longer road freight vehicles or Gigaliners, which pose a threat to the future viability of rail freight. 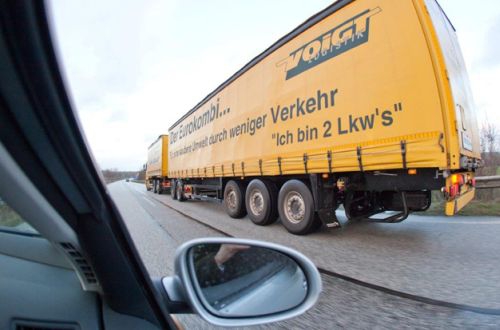 The message on the side of the LHV reads: "I am two HGVs."

A five-year trial in Germany with 25.25m-long trucks (LHV) weighing up to 44 tonnes is due to be completed at the end of this year. A standard HGV in Germany is 18.75m long.

“The draft text was sent by the Federal Transport Ministry (BMVI) to transport organisations for their comments, whereas the final report from the Federal Highway Research Institute (BASt) has only been seen by the ministry and is obviously going to be kept secret,” says the alliance. “We were astonished to learn that the final report from the researchers accompanying the trials has already been sent to the BMVI but has neither been published nor sent to the transport organisations.

“The whole logic behind giving longer vehicles unrestricted approval is still very much in doubt,” the alliance says. “For example, the explanatory statement in the regulation mentions, among other things, safety problems caused by emergency bays in tunnels that are too short, increased fire load and vehicles having to stray into neighbouring lanes. The consequences for road safety of approving longer vehicles cannot simply be brushed aside by pointing to the low number of vehicles that took part in the trials.”

“The casual way the BASt report is being handled exposes these so-called road trials as a scientific fig leaf,” says Mr Dirk Flege, managing director of the Pro-Rail Alliance. “None of the fundamental concerns about allowing longer HGVs have been refuted by the trials. Because only a few longer vehicles were involved in the trials, the report cannot make any serious conclusions about the risk of shifting freight from the railways to the roads, or the dangers for car drivers. We therefore continue to completely reject allowing their unrestricted use. There are numerous studies that are unequivocally against allowing longer trucks or further trials.”

The alliance believes the concept should be rejected because:

• LHVs are dangerous for car drivers - heavy goods vehicles are already involved in one in five fatal accidents, which is why the majority of Germans are opposed to these vehicles
• LHVs are expensive for taxpayers because bigger trucks will disproportionally damage the already ailing road infrastructure, and
• LHVs will damage the environment because by lowering the cost of road transport, freight will be shifted from rail to road, resulting in an increase, not a reduction in HGVs on Germany’s roads, to the detriment of environmentally-friendly rail freight transport.

“Long HGVs have been in use in Finland and Sweden for some time now,” the alliance says. “However, Scandinavia is very spread out and thinly populated, with low volumes of traffic. These countries cannot be compared with the rest of Europe, where the road network is dense and the traffic is very heavy, making them unsuitable for LHVs. In addition, Denmark and the Netherlands are running trials of 25m trucks that weigh 60 tonnes.

“The supporters of longer vehicles like to back up their cause using environmental arguments, but in reality they are hoping to make savings of up to 30%,” the alliance says. “The opponents of longer vehicles are afraid that the cost reductions gained by using LHVs will lead to an increase in road freight transport.”

The European Parliament and European Union (EU) transport ministers last year rejected moves by the EU Commission to make changes to a directive that would allow LHVs to make cross-border journeys between neighbouring countries. “Whereas trials of LHVs are currently taking place in several member states, the EU has now shown the so-called Gigaliners a stop sign,” the alliance says. “With its proposals for improving safety and optimising aerodynamics, it is taking a completely different approach.”