The operator’s first service will run between freight terminals in England and Scotland. 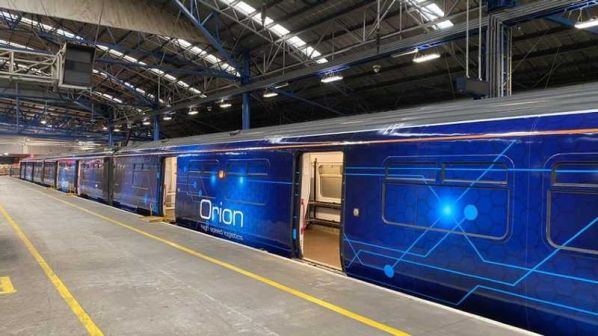 “It looks like our first service will be launched towards the end of April,” Watts says. “It will be from England's West Midlands to Scotland’s Central Belt, an Anglo-Scottish operation.”

The service will start with a regular operation of five round trips, eventually increasing to six, and will primarily transport light goods and parcels.

All Orion logistics services are planned to be operated by fleets of class 769s bi-mode multiple units, which are class 319 dual voltage EMUs converted to carry light consumer freight and fitted with a diesel engine. Orion will also operate class 769s and 319s working in multiple.

The launch follows a showcase of ROUK’s first class 319 logistics train at the Birmingham Intermodal Freight Terminal (BIRT) in Birch Coppice for potential partners and customers between January 18 and 20.

Orion plans to eventually roll out its higher-speed logistics and rail freight services nationwide, operating at up to 160km/h. The company hopes to provide higher frequencies and speeds than traditional British rail freight operators, which are limited to 120km/h operation, and offer an attractive alternative to road freight by offering speedy, flexible delivery.

Orion originally planned to launch its London Gateway - Liverpool service in May 2020. However, Watts says the West Midlands - Central Belt train as ultimately a “much bigger opportunity.” ROUK now plans to begin operation of the London - Liverpool service sometime between July and August of this year.

“Liverpool Street will have to wait until the next train comes,” Watts says.

The start of London – Liverpool service has been hit by delays with the delivery of the class 769 trains due to technical issues with the supplier, leasing company Porterbrook. “They’re key to this operation, because of course it’s a bi-mode train and most logistics hubs in this country are not electrified.”

ROUK has begun a rapid expansion following its acquisition by European fund manager, Star Capital, on January 12. The company also ordered an initial batch of 10 class 93 electric-battery-diesel-electric tri-mode locomotives under a framework agreement for up to 30 in the same month, for delivery in early 2023.

An in-depth interview with Karl Watts will appear in the May edition of IRJ.