US intermodal freight company RailRunner launched its first services in Europe on July 31 with the start of a daily flow between Bratislava and Braunschweig. 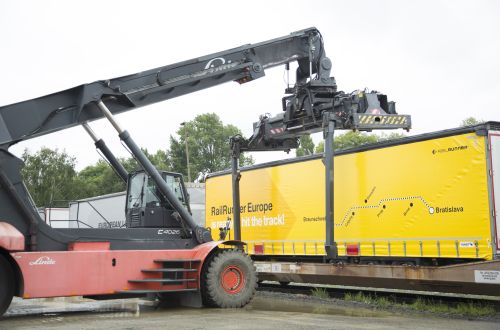 In the initial phase of operations RailRunner is using conventional pocket wagons to carry craneable mega trailers, swap bodies and containers. However, in 2019 the company will introduce its Terminal Anywhere solution, which enables lorry trailers to be loaded onto RailRunner bogies, an operation which takes just two minutes.

During the initial phase of operations, data on capacity utilisation, traction energy demand, handling performance, transport time and other factors will be recorded.

The train is equipped with GPS and the lorry trailers, which are rented by RailRunner and made available for forwarding customers, are also equipped with telematics systems. This means the location of each consignment is separately tracked by two independent location systems.