SWISS intermodal operator RAlpin held an official ceremony in Freiburg im Breisgau, Germany, on March 16 to mark the opening of its modernised handling terminal after around two years of construction work. 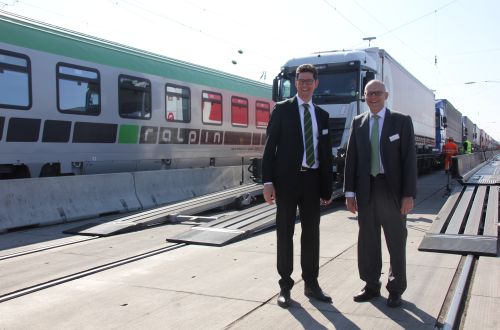 The ceremony was attended by representatives of the city of Freiburg and the Swiss federal office of transport, plus major customers and partners. The main features of the refurbished terminal are a 600m access road to enable south-bound lorries to board trains at the northern end and a new building with offices as well as facilities for lorry drivers.

With the change in the direction of loading, operations in the terminal are significantly improved, since the trains can be more efficiently loaded for their journey through the Alps.

As RAlpin CEO Mr René Dancet pointed out, “The layout of the facility is better arranged, and safety has been improved as well.” Trains previously made a time-consuming loop in the Basle area.

The reconstruction project cost around €15m and was financed with the help of the Swiss government as it pursues its goal to reduce the number of lorries in transit across the Alps by road to 650,000 units a year by 2018. Progress is being made: the total in 2016 was below 1 million for the first time for many years, according to Dancet.

RAlpin carries around 100,000 lorries a year on its transalpine route between Freiburg and Novara. A total of 62 trains are loaded/unloaded per week in Freiburg. The refurbished terminal can handle trains with up to 25 low-floor wagons, up from 22, and it also has a larger parking area for lorries.