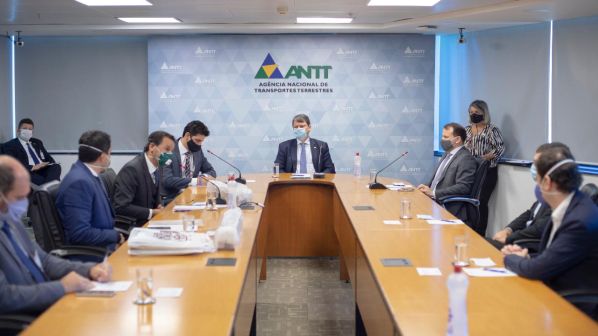 The signing ceremony took place at ANTT's headquarters on May 27.
Photo Credit: ANTT

Under the early renewal agreement, the concessionaire will pay the government a fee of Reais 2.91bn ($US 538.4m) at December 2017 prices and will invest Reais 6bn in infrastructure, which will increase the railway’s capacity from 40 million tonnes to 100 million tonnes of products which include corn, soy, sugar, soy meal, alcohol, oil products as well as TEUs. An additional Reais 1bn will be spent on improving the railway’s conflicts with local municipalities, which ANTT says could benefit up to 5.3 million people.

The agreement was signed during an event attended by Brazil’s minister of infrastructure, Mr Tarcisio de Freitas and ANTTT’s board and concludes four years of negotiations. The signing took place following approval of the terms by Brazil’s Federal Audit Court on the week of May 18. The concession will now run for another 30 years until 2050, with the option to end the contract early in 2028.

“Today is a historic day,” de Freitas says. “It was possible because we had the best team. We overcame many challenges to provide Brazil with railway investments after so long. I think of the 10,000 workers who will have jobs soon and how this project will make a difference in people's lives. And it paves the way for new projects that will balance the country's transport matrix.”

Other benefits outlined by ANTT include the generation of Reais 3bn in taxes paid throughout the duration of the contract. Over the next six years the government will receive Reais 600m in tax. The concessionaire is also expected to create 7000 jobs in the first 10 years and 2000 jobs in subsequent years.

The existing concession for the 1989km network was awarded to Ferroban in 1998 and was due to expire in 2028. During the concession Ferroban became Latin American Logistics (ALL) in 2008 which in turn was taken over by Rumo in 2016.

Around 1500km of the Paulista network is 1600mm gauge, with the rest either metre or dual gauge. The network serves the state of São Paulo and runs from Santa Fé do Sul, on the border with Mato Grosso do Sul state, to the port of Santos. The main types of freight transported on the network are corn, soy, sugar, soybean meal, iron-ore, diesel oil, containers, cellulose, alcohol, manganese and gasoline.

In addition, the Carajás Railway, the Vitória-Minas Railway and the MRS Logístics concessions are also in line for early renewal.