Rail network in Brazilian state to grow by 730km. 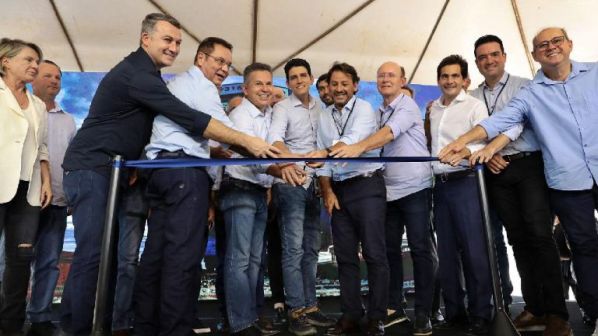 The start of work ceremony was held in Rondonópolis on November 7.
Photo Credit: Mayke Toscano/Secom-MT

A ceremony was held in Rondonópolis in the state of Mato Grosso on November 7 to mark the start of work on a 211km route to Campo Verde that is being built by freight concessionaire Rumo Logística at a cost of Reais 4.5bn ($US 872m).

The programme will involve the construction of 22 bridges totalling 11.5km in length, 21 viaducts and 2km of tunnels. Tracklaying will require 1.4 million sleepers and 108,000 tonnes of rail, and construction is expected to generate 200,000 direct and indirect jobs.

Rumo says that its new line construction programme, due for completion in 2030, will quadruple the size of the rail network in Mato Grosso. The state currently has 300km of railway and is Brazil’s largest grain exporter.

“It is a project of such scale that it will indeed transform our company,” says Rumo CEO, Mr João Alberto Abreu. “The state of Mato Grosso today already produces 40% of the country’s grain exports. This share of national exports will naturally increase, as there is still huge potential for growth.”

Abreu added that construction had only been made possible by the Mato Grosso government approving in February 2021 specific legislation to build its first railway under state rather than federal authority.

“This railway is the result of the work of a people that does not shy away from believing in the country,” says Mato Grosso minister of infrastructure, Mr Marcelo Sampaio. “It is fundamental to make the state increasingly more competitive and more efficient.”

An in-depth report on prospects for rail in Brazil will appear in the January issue of IRJ.