UNITED Grain Company, Russia, has awarded a contract to United Wagon Company for the supply of 1500 grain hopper wagons as part of a plan to establish an 8500 wagon fleet. 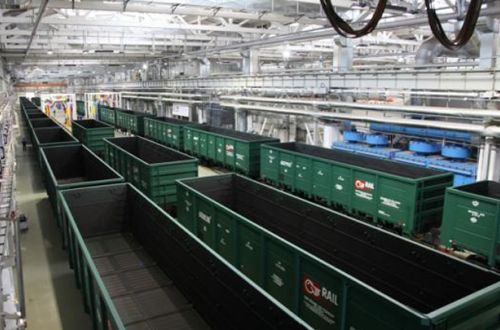 The grain wagons will be manufactured at United Wagon’s Tikhvin Freight Car Building Plant. The 1520mm-gauge bogie wagons will have a 25-tonne axleload, and a loading capacity of 120m3 and 76 tonnes. The wagons are designed to operate up to eight years or 800,000km between overhauls which United Wagon says will reduce life-cycle costs by a factor of three compared with previous wagon designs.

The wagons will be deployed in Russia’s southern and eastern grain corridors where United Grain is currently modernising grain handling facilities at Novorossiysk and constructing a grain terminal at the far-eastern port of Zarubino under the Roubles 4.6bn ($US 73m) first phase of project to create a fleet of 8500 wagons by 2020 capable of carrying 10 million tonnes of grain a year.

“With our own fleet, we will become a stronger competitor and improve our logistics performance, and with infrastructure facilities such as grain elevators and port terminals we will enjoy steady freight traffic growth,” says Mr Marat Shaidaev, director of United Grain Company.