SAUDI Railway Company (SAR) has started to take delivery of 1186 tank wagons for the transport of sulphur and phosphoric acid for operation of the 2750km North-South Railway. 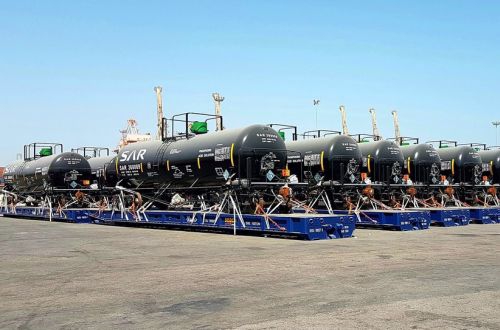 The wagons are of three types and comprise 58 for the transport of pure phosphoric acid, 586 for moving phosphoric acid, and 562 for carrying molten sulphur. The latter have thermal insulation and special safety equipment to prevent explosions or combustion during transit. The sulphur wagons are designed so that the temperature of the sulphur can be increased to 120oC to convert it back to a liquid to facilitate unloading.

SAR is also taking delivery of another 36 diesel locomotives from Electro-Motive Diesel (EMD), United States, to haul the new wagons. Three locomotives will be used to haul each consist of 30 wagons. The locomotives are designed to withstand temperatures ranging from -10oC to 65oC and have a system to expel air to prevent the accumulation of dust and sand in the air filters. The locomotives also have high-definition cameras at each end to improve safety as well as sand ploughs.

The trains are expected to transport 2.3 million tonnes of raw materials and finished products to and from seven chemical plants being built by Ma’aden at the new Promise of the North facility near Turaif in the north of the country. The plant will be able to produce 16 million tonnes of chemical products a year when it is completed.