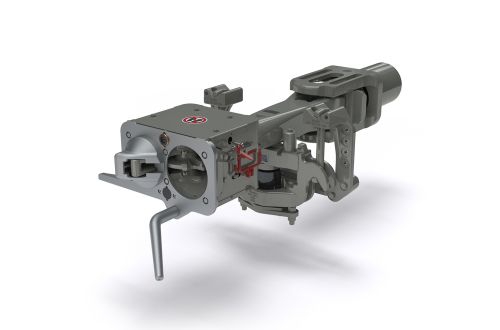 The trial will follow pilots with seven wagons as part of SBB’s four-year 5L demonstrator train research project, which has the five objectives of introducing lightweight, low-noise, durable, and highly compatible rolling stock as well as extended asset lifecycles.

Voith says its new CargoFlex Type Scharfenberg coupling acts the same in principle as any previous Scharfenberg coupling. However, it has been optimised for European freight traffic operation and adapted to the increasingly higher loads in freight service while incorporating a light-weight design which is a third less than the conventional coupling. The coupling's integrated dampener is also compliant with EN12663-2 for Category 1 freight wagons while the coupling is suitable for winter operation without the use of a heater.

During the trials a semi-automatic version of the system is in use where the air pipe is connected to the brake pipe automatically and can be opened again manually from outside of the vehicle. The pilot coupling is also equipped with an automatic uncoupling system and a signal or electric power transmission system.

Voith says the automatic coupling system, which will eliminate the need to couple wagons by hand which remains common across Europe.

“Voith made use of proven design principles in the freight coupler and made a conscious decision to avoid screw connections that are in the load path and require maintenance,” says Ms Jessica Amberg, SBB Cargo’s 5L Train project manager. “The tests performed thus far promise reliable operation in the freight train over the four-year test phase.”