A new Calais - Turin Orbassano intermodal freight service for unaccompanied semi-trailers was launched in Calais on November 6 which, it is hoped, will lead to the transfer of 31,000 lorries from road to rail, saving an estimated 1.2 tonnes of CO2 per trailer per trip. 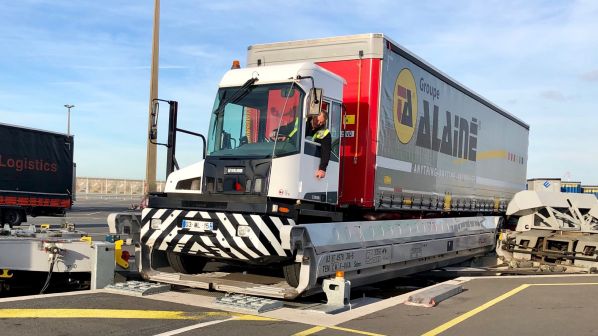 Semi-trailer being loaded onto a piggyback freight train in Calais.
Photo Credit: SNCF

The service is aimed at traffic to and from Britain and will initially operate three times per week in each direction, with a transit time of 18 hours for the 1150km journey. Eventually, it is hoped to provide two round trips per day. The service is operated jointly by SNCF and Mercitalia, the rail freight subsidiary of Italian State Railways (FS).

This is the fourth piggyback service to be introduced by Viia. The first was launched in 2003 between Chambery Aiton and Turin Orbassano. The service takes 3 hours to complete the 175km trip with four round trips a day. The Bettembourg (Luxembourg) - Le Boulou, south of Perpignan, service started in 2007 and offers three round trips a day covering the 1045km in 15 hours. The third piggyback service was introduced between Calais and Le Boulou in 2016 and takes 23 hours to cover the 1470km trip.