TRANSNET officials were all smiles at the South African rail and logistics interim results presentation last week as revenue continues to rise on the back of increased rail shipments. 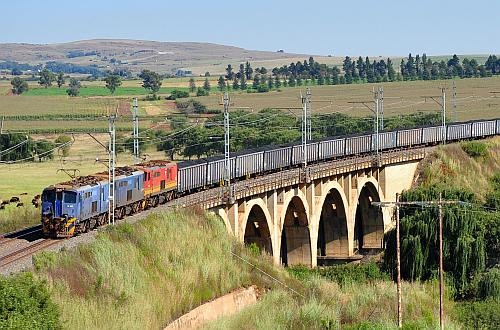 The state-owned-company reported a 7.5% surge in rail freight volumes to 103-million tonnes, giving the utility an 11% boost in revenues to Rand 24.9bn ($US 2.88bn) for the six months to the end of September. After tax profit, however, was down 25% to Rand 1.8bn, partly a result, says CEO Mr Brian Molefe, of the company's spending spree on new locomotives and infrastructure.

These are good numbers for Transnet, coming as they do as the company continues with a massive Rand 300bn investment programme that is the biggest of its kind in the company's history. Some 80% of the new investment will be in rail which goes some way to explaining the 35% surge in capital expenditure to Rand 12.8bn.

Much of that money has been spent on the heavy-haul ore and coal lines as Transnet seeks to assure local miners that it will be able to provide adequate capacity for burgeoning mineral exports. Traffic was up 11.2% and 7.8% respectively on these routes, but there may be a red signal ahead for coal traffic as falling prices put pressure on miners.

Transnet says it is pleased that its scheduled train operating model appears to be paying off. The new model was introduced on its containers and automotive unit where traffic reported a 19% increase to 5 million tonnes.

A great chunk of the new investment will be in rolling stock. The utility's shopping list includes more than a thousand new locomotives and 19,400 wagons. Transnet announced in October that CSR Zhuzhou Electric Locomotive Company had won a Rand 2.6bn contract for the supply of 95 dual-voltage electric locomotives for its General Freight Business.

The contract is to be split 70-30 between CSR and South African empowerment consortium Matsetse Basadi, which raised questions about what physical contribution the empowerment partners would make to the project.

Molefe defended the decision last week on local business channel Summit TV, saying that the Chinese were happy with their empowerment partner. "They are professionals in their own right," he said. "They have not operated a rail line before, they have not built trains before but as professionals, the Chinese say they will be able to run the business. That is a business decision by the Chinese."