A JOINT study by the Norwegian and Swedish infrastructure managers, Jernbaneverket and Trafikverket, recommends upgrading the heavy-haul line linking Kiruna and Narvik to meet a forecast growth in traffic. 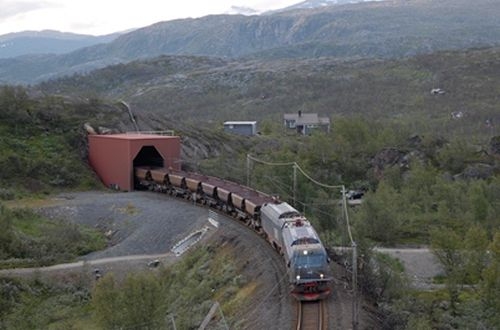 The study shows that demand for iron-ore traffic from mines in Sweden and eventually Finland could require an increase in the number of trains a day from 20 to 44 by 2020, while the number of conventional freight trains is expected to rise from eight to between 12 and 26 a day and the number of daily passenger trains could double from six to 12. The study says that upgrading the line to double track is therefore both necessary and economically viable.

"It has long been clear that the capacity on the route must be expanded," says Mr Gunnar Markussen, a member of the working group. "Until now this has been resolved with a gradual expansion of capacity, with new and longer passing loops while the axleload has been increased to 30 tonnes. But all the research shows that this will no longer be sufficient to meet the needs of the market."

The working group says that more work is needed to decide how to fund and manage the upgrade. Several options are possible such as direct grants through an agreement between Norway and Sweden, or by setting up a joint venture company, or through a public-private partnership deal, or by converting Ofotbanen and Malmbanan, which currently operate the line, into a jointly-owned infrastructure company.

The study also recommends the establishment of a joint project between Jernbaneverket and Trafikverket to plan and develop the project, especially as the installation of ERTMS will require considerable coordination. The study also wants Jernbaneverket and Trafikverket to harmonise technical and operating rules as well as traffic management on the route.

The study says the two infrastructure managers should establish their own agreements with train operating companies to create the necessary predictability and lowest risk for all parties, and it recommends the introduction of access charges based on the ability of the various operators to pay.

The study says the upgrading work should be implemented incrementally so that the benefits can be realised as work on each section is completed.