SWEDISH infrastructure manager Trafikverket has increased the maximum axleload on the southern section of the 473km Iron Ore Line from Luleå to the Norwegian port of Narvik from 30 to 32.5 tonnes following a two-year trial with mining company LKAB, which operates heavy-haul trains on the route. 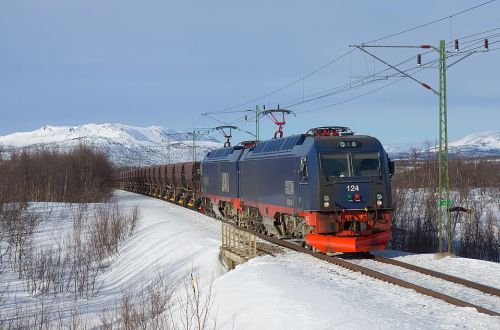 Upgrading of the 210km section between Luleå and Vitåfors has increased the maximum payload for iron-ore trains on this stretch by 680 tonnes. Previously the maximum gross weight of these trains, which are formed of two locomotives and 68 wagons, was around 8500 tonnes.

Trials with 32.5-tonne axleloads began in autumn 2015 with one train a day, increasing to two trains a day from autumn 2016.

LKAB’s Fanoo iron-ore wagons were designed with a structure capable of accommodating 32.5-tonne axleloads, although until now the fleet of 1130 vehicles has been limited to 30 tonnes in normal service.

Trafikverket says 32.5-tonne axleloads will be introduced gradually and further adjustments to the infrastructure will be made. Studies are also being carried out into the possibility of raising the axleload on the remainder of the line to Narvik.