SWITZERLAND’s rail freight operators continued to gain market share from road in 2016, according to figures published this week by the Federal Statistical Office (FSO). 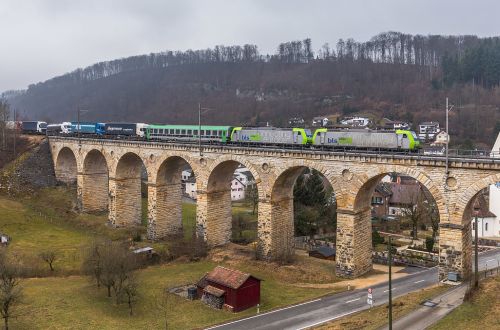 Rail’s market share increased by 0.9% compared with the previous year, while road’s share of the freight market declined by 1.5%

Total traffic across the two sectors fell 0.6% to 27.8 billion tonne-km, with rail accounting for 39% of freight carried.

This means that rail has regained the market share it recorded in 2008; it lost ground in 2009 because of the financial and economic crisis, falling to an all-time low of 35.9%.

The two modes of transport are not so much competitors as complementary service providers, according to the FSO. While the local distribution of goods can only be carried out in most cases by road in this small, mountainous country, rail transport often offers greater advantages over longer distances. As a result, rail transport dominates the international market (import, export and transit) with 67%, with transit alone accounting for 56%. This compares with only 37% of international traffic for the road sector.

This figures for 2017 may look less favourable because of the closure of the Rhine Valley Line, a key north-south freight artery, between August 12 and October 2 due to a landslip at Rastatt in Germany. Swiss Federal Railways (SBB) says this led to a SFr 26.5m ($US 27m) drop in its revenues, excluding associated costs. The only consolation is that lessons can be learned from this experience: SBB is already talking with German Rail (DB) about improving international cooperation and developing more efficient corridor management.