Route via France proposed to avoid disruption in Germany. 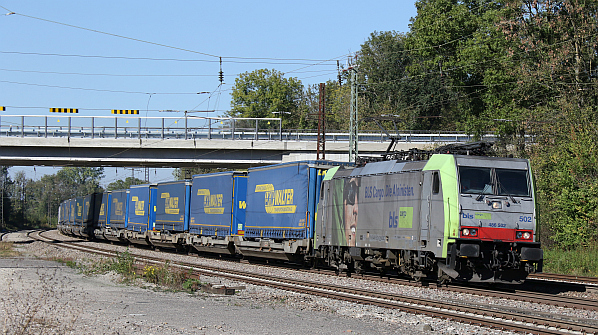 THE Swiss railway industry, including intermodal operator Hupac, says action is needed now to increase capacity on the key north-south freight corridor running along the Rhine Valley, as upgrade work in Germany is bringing traffic to a virtual standstill.

The upgrade of the route between Basel and Karlsruhe is not expected to be completed before 2040-45, providing a four-track railway able to accommodate freight trains up to 740m long and 2000 tonnes in weight.

In the meantime, current capacity bottlenecks are noticeably worsening, and the Swiss railway industry says that disruptive work sites and insufficient diversionary routes are causing so much strain “that regular freight transport operation is hardly possible any more.”

“Already today, shippers are showing a tendency to shift back to the road, especially for time-sensitive goods,” says a statement published by Hupac on its website.

Rail freight capacity along the banks of the Rhine River has received greater scrutiny in recent weeks as low water levels on the river itself are forcing shipping companies to reduce capacity on barges, with some only able to carry a quarter of their usual volumes.

To safeguard capacity and stabilise operations, the Swiss industry group says the focus should be on the route running through France along the left bank of the Rhine, which thanks to its easy gradient profile forms “an ideal complement and alternative” to the German route on the right bank.

The route running from Basel in Switzerland via Strasbourg to Lauterbourg on the German border would be able to provide the P400 loading gauge needed to accommodate pocket wagons carrying road semi-trailers, according to the statement.

Top of the Swiss list of priorities is a rapid upgrade of the route from Strasbourg to Lauterbourg and on to Wörth am Rhein in Germany, including electrification.

“The Swiss authorities should now press ahead with negotiations with neighbouring countries to achieve electrification and upgrading of the Wörth - Strasbourg line as an alternative route as soon as possible,” says the statement. “With relatively little funding, additional capacity of 60 freight trains per day can be attained within a few years.”

With a four-week total closure of the German route due to take place in summer 2024, some use could be made of the route in France “but only with disproportionately high operational effort and only for a small number of trains per day,” says the statement.

In order to avoid another capacity crisis, the Swiss railway industry wants to make it easier for freight trains to be diverted via France. Temporary solutions should be found so that German-speaking drivers can take trains into France, such as enabling communications through bilingual apps or deploying bilingual staff at control centres.

The procedures for drivers to obtain route knowledge should also be temporarily simplified.

Coordinated train path management on the left bank of the Rhine is also of central importance. The infrastructure managers in Germany, France and Switzerland should draw up “a joint catalogue of continuous train paths,” enabling as many freight trains as possible to operate in a stable and fluid manner.

According to the statement, capacity could increase significantly by lifting restrictions on trains operating at night.

Prior to line closures, infrastructure managers must ensure that diversionary routes are free from work sites and are suitable for international transit traffic as regards train length and other parameters.

“It is in Switzerland's interest that the general renewal of congested rail corridors, as announced in Germany, includes effective bypass concepts from the very beginning,” Hupac says.

The challenges facing rail freight in the Rhine corridor can only be met through international cooperation, and the Swiss industry proposes the creation of a working group of infrastructure managers and transport ministries.

This would aim to balance the requirements of infrastructure works programmes with the need to maintain a viable freight service that is attractive to shippers.

“The coming years of intensive construction activity are crucial in order not to jeopardise the success we have achieved in modal shift,” says the statement.