SNCF Geodis subsidiary Viia successfully operated a test train on Switzerland's Gotthard line on October 24 as part of its Transhelvetica project to carry semi-trailers with a 4m corner height across the Alps. 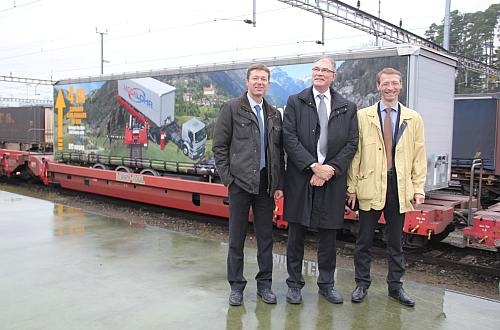 No problems were encountered on the two return trips between Arth-Goldau and Airolo, which used Modalohr wagons.

Transhelvetica is being developed to carry over 100,000 non-craneable standard semi-trailers between the Ruhr area, Lahr in southern Germany, and Chiasso on the Swiss-Italian border from 2015.

The test run was required by the Swiss Federal Transport Office (BAV) in order to demonstrate that Modalohr low-floor wagons could carry semi-trailers with 4m corner height on lines normally cleared for a maximum corner height of 3.84m.

The wagons used on the test run were standard Modalohr units with a few modifications, although further trials will be carried out next spring using the prototype UIC Modalohr wagon, the design which will eventually be used on the Transhelvetica service.

Mr Hervé Morel, sales director at Lohr Industrie said that Transhelvetica will make a useful contribution to Switzerland's modal shift policy without taking traffic from intermodal rail operations across the Alps as existing services mostly carry craneable trailers. Moreover, the new service will be able to use the existing infrastructure without expensive modifications, he added.