US railways serving Houston and the surrounding region have suspended train services as heavy rain and widespread flooding caused by Tropical Storm Harvey continues to affect southern Texas and Louisiana. 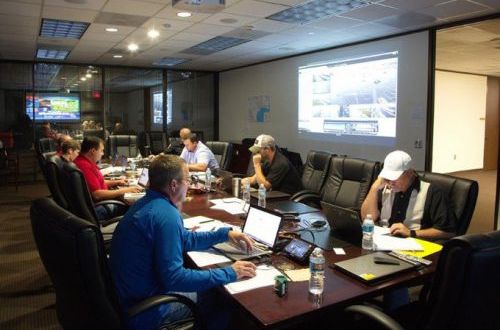 Staff in the BNSF command centre.

BNSF says flooding in the greater Houston area is causing major disruption to its freight services and operations. Some locations have received nearly 1m of rain, with more rain forecast. All traffic to and from Houston and at yards in the area has been suspended amid multiple washouts and high water reported on BNSF main lines.

“Our 24/7 Command Centre remains in frequent communication with local, state and federal emergency personnel to evaluate conditions and determine when operations can safely resume,” says BNSF. “With additional flooding likely during the next few days, normal train flows in the area may not resume for an extended period. Customers should expect continued delays on shipments scheduled to move through the area.”

Union Pacific (UP) faces similar problems, with rail operations along the Gulf Coast from Brownsville, Texas, to Lake Charles, Louisiana, currently suspended due to high water and storm damage. “As weather and access to storm-damaged areas allows, we are inspecting and repairing track, bridges and signals to return to service as quickly and safely as possible,” UP says.

“Until the storms move out and the flooding recedes, we are not able to access or inspect our tracks and facilities in the greater Houston area. Rain and flooding continues in Houston and east of Houston into Louisiana,” UP continues. “Routes through San Antonio are opening up which will allow us to run trains both north and south between San Antonio and Hearne, Texas. The Laredo gateway remains open to interchange traffic with the Mexican railroads.”

Kansas City Southern Railway (KCSR) says line closures between Kendleton (Houston) and Laredo, Texas, resulted in a Force Majeure being declared for KCSR and its Mexican subsidiary. The railway so far has not been able to assess damage to its network, adding there are additional flood warnings for the eastern Gulf Region including Port Arthur and Beaumont, Texas, and Lake Charles.

“We continue to monitor the current weather, the forecast and our network and are working closely with our rail partners to have a plan in place for possible detours should they be needed once the rain subsides and assessments can be made.”