SNCF Logistics rolling road subsidiary Viia launched its Viia Britanica service for unaccompanied lorry semi-trailers on March 29, with the first train departing from the port of Calais at 02.00 and arriving at Le Boulou near Perpignan close to the French-Spanish border just 22 hours later. 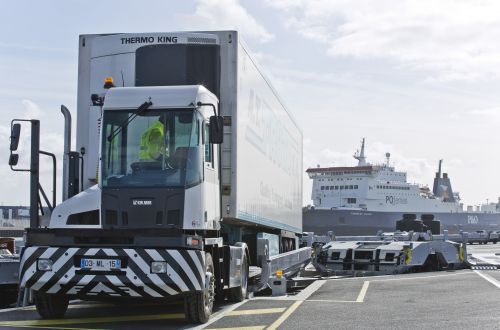 At around 1200km, Viia Britannica is the longest rolling road operation in Europe. Viia Britanica will operate six return trips a week between the Pyrenees and the English Channel, with a view to doubling frequency at a later stage. Each train is 680m long with 20 wagons with a total capacity of 40 semitrailers. Viia expects to carry 40,000 units a year over the next five years.

The rolling road terminal at the port of Calais, which was inaugurated last October, is the first facility of its type in a port, being a trimodal terminal for semitrailers travelling from Spain to Britain, northern France and Belgium.

Viia has signed an agreement for the Channel crossing with P&O Ferries, which operates up to 58 crossings a day between Calais and Dover. The semitrailers are loaded and unloaded by Viia with the Lohr system specially developed for the horizontal handling of lorry semitrailers.

"This new service will reinforce the rolling road network, allowing us to offer our road haulier clients more efficiency and competitiveness," says Viia president Mr Thierry le Guilloux. "We are already working on new connections to link Calais with other European terminal in the near future."