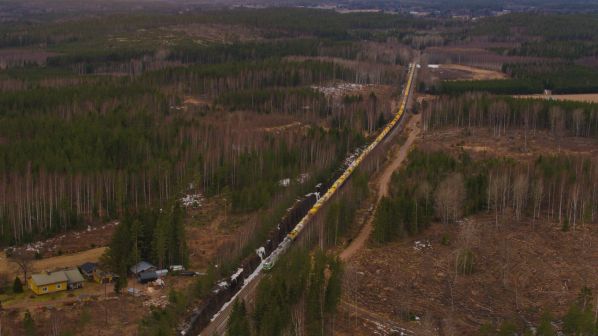 The 1km-long freight train, operated by the VR Transpoint subsidiary, has 80 wagons and can carry the equivalent of 92 lorries. The train, nicknamed Mörkö, or The Ogre, is hauled by two Siemens Vectron electric locomotives and operates between Vainikkala, on the Russian-Finnish border, and the port at Hamina.

“Since last summer, we have tested several 7000-tonne trains,” says Mr Martti Koskinen, senior vice president at VR Transpoint. “We now have experience in the operational reliability of such a heavy train in the different conditions of summer, autumn and winter. This is crucial as we are aiming for the maximum hauling capacity of our new electric locomotive.”

The previous Finnish record for a freight train was 6000 tonnes, the equivalent of 79 lorries, which was piloted on the Vainikkala - Hamina line last spring. However, VR says it is more focused on reducing overall energy consumption and emissions than simply beating records.

VR says longer trains are common in Russia, but these have previously split into smaller trains at the border. The introduction of the Vectron locomotives and enhanced axle loads means that the capacity in Finland can be increased.

“It would be considerably more efficient if we could drive the trains coming from Russia as they are to the harbour,” Koskinen says. “In addition to larger transports, this will positively impact VR Transpoint’s competitiveness, and Finnish transit traffic will also be seen as a more competitive option.”