The European Parliament has formally adopted 2021 as the European Year of Rail. Kevin Smith considers what the Year of Rail will entail and the wider challenges proponents should address. 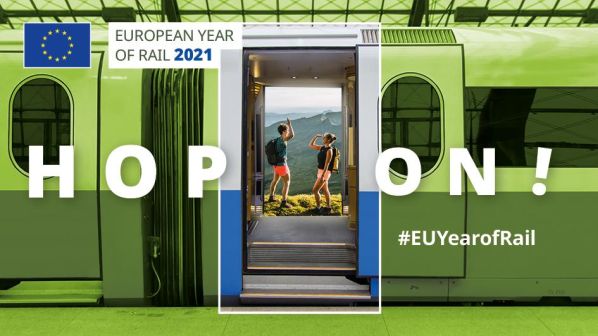 The EC says it does not foresee a formal extension to the European Year of Rail into 2022.

THE European Union’s Green Deal is set to inform European Union transport policy for a generation. And as the most sustainable transport mode, rail is set to benefit from several policies designed to stimulate modal shift from road and aviation for both passenger and freight transport.

The declaration of 2021 as Europe’s Year of Rail is intended to support delivery of the EU’s Green Deal objectives for transport and is an encouraging development for the sector. The European Parliament formally adopted the resolution on December 15 and European rail associations have embraced the plan since it was announced in March.

The Community of European Railways and Infrastructure Companies (CER) welcomed the decision to put the spotlight on a transport mode with a strong track record in climate neutrality, energy efficiency, resilience and innovation. Equally, the European Rail Freight Association (Erfa) said the European Year of Rail will be a unique occasion to finally deliver a legal framework that meets the needs of rail freight.

The declaration also comes at a critical time for the sector, and the continent. While the initial decision to designate 2021 as the year of rail was taken before the start of the coronavirus pandemic, the impact on passenger rail transport in particular over the past nine months is set to lead to significant soul searching throughout 2021 as the sector and governments identify the best route to recovery.

“Setting up a coherent and functional network across all Europe is an exercise in political cohesion,” says EC transport commissioner, Ms Adina Valean, in a statement announcing the Year of Rail. “The European Year of Rail is not a random event. It comes at an appropriate time, when the EU needs this kind of collective undertaking.”

Portugal took over the presidency of the European Council on January 1, including the transport council, and will dictate the agenda for how the first half of the Year of Rail will play out.

Mr João de Jesus Caetano, counsellor and permanent representative of Portugal to the European Union, told a webinar hosted by Rail Forum Europe on December 9 that he expects Portugal to host a meeting of member state transport ministers and relevant stakeholders in March entirely dedicated to rail, followed by an informal meeting of the EU Council. This will be followed by a council meeting in June, where he expects a conclusion on how to advance the discussions will take place.

“Setting up a coherent and functional network across all Europe is an exercise in political cohesion.”

“We would very much like to have a wider and more deep discussion during the next semester on the challenges and opportunities of rail transport,” Cateano says. “The commission isn’t planning any legislative initiative in the first semester so that will provide us more time and space to focus on the political discussion.”

Caetano says the EU’s plans to back rail mirror Portugal’s domestic plans to develop a long-term National Rail plan, the first such policy for the country. He says the country’s road plan from the 1990s has dictated investment in road infrastructure, which has been prioritised over the past 30 years.

“In the Portuguese plan for rail, we will look carefully at what the necessary investments are in order to promote this modal shift, which will allow for a cultural change where private ownership of cars is no longer a necessity and people can use other means of transport to decarbonise,” Caetano says. “We think that this discussion in Portugal, that will happen during the first semester, will benefit from the discussion on the European stage.”

Among the policies the EC’s Directorate General for Transport (DG-Move) is expected to work on during the Year of Rail are encouraging more people to use rail, the key challenge for the sector as it enters 2021; new proposals to boost rail freight connections to ports and terminals; better use of capacity; greening freight more generally; supporting a political and public desire to introduce expanded night train services; and improvements in ticketing provision.

The commission’s Smart and Sustainable Mobility Strategy, announced on December 9, will also guide commission work in the transport sector over the next four years. The strategy outlines 82 specific initiatives and lays the foundation for how the European transport system will become more digitalised and environmentally friendly, and more resilient to future crises. It will also guide efforts to reduce emissions by 55% by 2030 compared with 1990 as outlined in the Green Deal as Europe strives to become carbon neutral by 2050.

For the rail sector specifically, the strategy is targeting the doubling of high-speed traffic by 2030 and rail freight traffic by 2050. However, while Caetano feels introducing targets to develop high-speed rail connections between European capitals are applicable in central Europe, it is less relevant in the periphery. “The nearest capital to Lisbon is Madrid, which is 600km away, and the second nearest is Paris, which is 1800km away,” he says. “Even if we have a high-speed train connecting Lisbon with other capitals in Europe, it will never be competitive with air transport.”
Instead he feels there should be greater emphasis on urban and commuter rail transport.

“In European forums, we are usually more likely to discuss pan-European networks,” Caetano says. “I think next year we will have to discuss the relevance of urban and suburban regional rail transport. If you want decarbonisation to happen, it will be quicker if we have modal shift at the local level. We need massive investments in the pan-European network, but we also need massive investment in local rail networks so the tens of millions of people who commute every day can use rail transport more than ever before.”

Mr Mohamed Mezghani, secretary general of the International Association of Public Transport (UITP), made a similar observation in his response to the release of the strategy.

“Sustainable mobility and public transport are mentioned two times in the whole document,” Mezghani told IRJ. “It feels like they are not taking into consideration the benefits of public transport and we wonder why these advantages are not mentioned. We really consider this as a missed opportunity.”

Mezghani adds that while the strategy recognises that technology measures are not a panacea, he feels there is an overemphasis on technology-orientated targets, for example for 100 EU cities to be climate neutral by 2030.

“If we combine these targets with the technology measures, it will be mean that by 2030 EU cities will be climate neutral but heavily congested with electric cars,” Mezghani says. “Is that what we want? We need targets in terms of modal shift, in terms of accessibility, affordability, and social inclusion.”

Implementation of the Fourth Railway Package - the foundation of recent efforts by the EU to adopt a Single European Rail Area - is set to ramp up in 2021. The establishment of the European Union Agency for Railways (ERA) as a “one stop shop” for vehicle authorisation in Europe and the transposition of the technical pillar by all member states in October, is set to reduce the red tape in this area, helping to get new trains on tracks much faster.

However, for her, three major challenges stood out:

Thaler says state-owned regional monopolies and the extraordinary share of PSO contracts incentivises the sector to focus governments on keeping the subsidies flowing and the closed systems stable. She says this makes achieving environmental targets and modal shift towards rail more difficult. “I believe that this focus might not create the best environment,” she says. “It is definitely not helpful for the competitiveness of rail towards other modes of transport.”

Instead Thaler favours solutions that make competition easier and which install a level playing field for private companies, which can realistically compete with the taxpayer.

“The European Year of Rail mentions competition as one of the key enablers to help the sector to meet the expectations we have,” Thaler says. “But as I witnessed during all the talks around the [Year of Rail] file, everyone acknowledges the importance of competition, as everyone acknowledges the importance of wind power, but preferably not in my backyard.

“When push comes to shove, nobody moves but expects everyone else to move. Here the tight web between the sectors and the governments creates unintentionally the best condition for aviation and roads. Since both modes can operate without borders and can draw the full advantage out of the internal markets, while rail is busy safeguarding its own 25 backyards.”

“The Green Deal-inspired legislation aims to boost the rail sector and it is truly a once in a lifetime opportunity to fix the sector’s problems,”

Ms Barbara Thaler, an Austrian MEP, member of the transport and tourism (Tran) committee, and shadow rapporteur of European Year of Rail

These 25 backyards continue to be ring-fenced by national rules and directives. Thaler says getting rid of all the unnecessary national rules should be the “first task for everyone in Europe who wants to boost the sector.” It is hoped the upcoming revision to the TEN-T directive, which is expected in 2021, will reinforce the importance of these corridors for facilitating cross-border rail travel in Europe.

“If we don’t cut the red tape, we endanger the success of the upcoming fights like TEN-T and the rail freight corridors,” Thaler says.
Finally, she urged the sector to improve its collection and sharing of data, especially to improve the provision of tickets among all vendors, which should attract more people to use rail.

When asked what they hope the European Year of Rail has achieved by December 2021, Thaler said she believes it will be a “huge success” if member states fully comply with the Fourth Railway Package. A “tremendous success” would be the establishment of some pilot projects or a starting point for infrastructure managers to more effectively oversee the TEN-T network.

Likewise, Caetano said he is hopeful that a new framework to address the challenges facing rail transport will emerge. “I think when the commission decided that 2021 was to be dedicated to rail, we were far from imagining the circumstances we are in now,” he says. “We have an opportunity to discuss rail in a way that probably was not done before.”

While it is certainly a great PR exercise for the sector as it attempts to bounce back after the travails of 2020, the European Year of Rail must deliver more than simply an improved public image. As Cateano intimates, it should be the springboard from which Europe’s railways can finally deliver on the promises of modal shift. These are perhaps bold expectations, especially in a political arena notorious for its bureaucracy and glacial pace of progress. But if European leaders are serious about making rail a key part of their Green Deal, the time to act is now.

“The Green Deal-inspired legislation aims to boost the rail sector and it is truly a once in a lifetime opportunity to fix the sector’s problems,” Thaler says. “If we get it wrong, then we will get it wrong for the entire sector.”