A life-cycle approach to braking costs 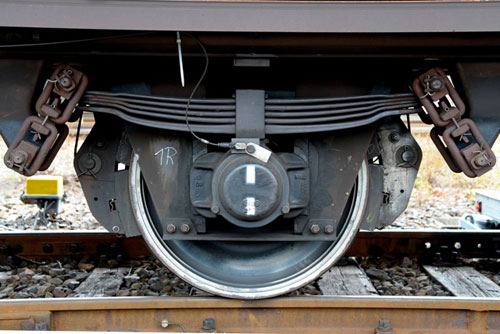 THE pressure to reduce costs in the rail industry often means that brake pads and shoes are viewed as commodity items, often replaced on a lowest price basis providing the performance is satisfactory. Few realise this may not produce the lowest operating cost: the choice of friction material can have a direct influence on the wear life of the mating disc or wheel, which is typically much more expensive to replace.

A more effective approach may be Life Cycle Costing (LCC) in which the total cost of the brake system over its entire life is considered. Friction products are safety-critical items that must be carefully designed and selected to ensure that they meet a range of performance criteria. The design or formulation selected is a compromise between several conflicting priorities and the trade-offs can be tailored according to the wide range of different customer requirements that exist in the market.

There are three principal factors that influence the selection of a friction material for railway applications, whether for a pad or block:

The product must also fulfil specific frictional performance criteria over a range of speeds and braking efforts.

These criteria differ from one market to another and may be defined by local operators or by organisations such as the International Union of Railways (UIC) or the Association of American Railroads (AAR) which set international standards.

The environmental requirements on the material are defined by legislation that differs between countries. To ensure international compliance, Federal-Mogul friction materials contain no asbestos or lead, and no materials in development contain heavy metals or solvent-based rubbers. These issues are as much a concern during the production process and the end-of-life disposal as during the use of the material in service.

The development and implementation of environmental legislation is a significant factor for the industry, given the long service life of locomotives and rolling stock and the high cost associated with certifying new products. Once statutory requirements have been met, cost becomes a significant factor in determining which friction product is specified for replacement purposes.

Large sections of the rail market are run on the basis of periodic tenders for business, with friction products treated as a commodity for which selection is based on the unit price. Other industries have progressed from this traditional "unit-price only" approach and are using alternative cost models.

A key issue with unit-price costing is that pad or block materials which are similar in frictional performance - and therefore certification - might be assumed to differ in cost to the end-user only in terms of their durability. A product which lasts 20% longer than its competitor might therefore appear at first glance to offer a reduced operating cost. But if the material causes a more aggressive rate of wear on the mating disc or wheel than its competitors, then the overall cost equation becomes very different because the cost and durability of the high-cost mating part must be considered. This is the basis of LCC and is important in the selection of the appropriate friction couple.

The friction couple, consisting of the pad and disc or wheel and shoe, can be developed so that they work in a complementary fashion, and on this basis a significant improvement in the overall cost of ownership may be achieved. The case studies that follow illustrate the benefit of this approach.

In one example, an existing brake pad and disc combination gave a service life for the steel axle-mounted disc of between 800,000 and 1.1 million km. When replaced with a Ferodo friction material, the disc life was improved to an estimated 2.57 million km. This has a direct cost-saving and improves the efficiency of maintenance scheduling.

The cost of discs and pads over 2.57 million km using the original pads came to a total of £7320 whereas using the Ferodo pads the cost was just £2700, a saving of £4620 per axle. Despite the higher price of the pads, disc wear reduced by a factor of three.

The detailed cost breakdown over 2.57 million km using the original pads includes 18 sets of pads at around £40 per set and 3.3 discs at around £2000 per disc, a total of approximately £7320. The corresponding figures for the Ferodo pads are 14 sets of pads at £50 per set plus one disc at £2000, totalling £2700. Operating costs are dominated by the cost of replacement discs rather than the cost of the friction materials.

While the figures are for a single axle, a replacement set of discs for a complete train could cost £100,000, to which must be added the cost of maintenance and the lost revenue while the rolling stock is out of service. For the train in question, the significance of the 2.57 million km figure is that it aligns with a major service interval: the bogie/gearbox overhaul. Thus, by using the improved friction couple, disc replacement can take place at the same time, improving the efficiency of the maintenance schedule, reducing maintenance costs and increasing train availability.

In another application where the friction couple consisted of an established pad material and a steel disc, the service life of the disc was found to be approximately 241,000km. By comparison, changing to a Ferodo pad with a small change to the disc metallurgy increased the typical disc life by a factor of five, to more than 1.2 million km. This exceeded the main axle overhaul period for this application, allowing the operator to make savings of a similar magnitude to those described in the first case study.

In other studies, relating to block and shoe materials rather than pads, a similar outcome has been observed. For these applications the rate of wheel wear is the factor which determines the overall life-cycle cost, rather than simply the cost of the block itself.

Development and certification of a friction material is a complex, time-consuming and expensive process, especially when field trials are necessary to verify the material's performance over an extended period. Generally, it is not economically feasible to engineer a material for use on a specific train running on a particular route.

Dependent on the industry structure and the relationships between train operators and maintenance contractors, full information regarding train use, material performance and service intervals may not be readily available to the friction material supplier. In these circumstances, the most effective route to the development of materials that offer improved life-cycle costs is for the supplier to work in partnership with one or more of the parties involved so that the key targets can be built in at an early stage of the material development programme.

It is often the case that friction material design is not just driven by cost but also by environmental or legislative requirements. The need to manufacture friction materials free from asbestos and lead was driven by both. The European Union is now encouraging the rail industry to reduce freight train noise by 2020. In order for operators to address lineside noise and minimise disruptions to maintenance schedules a new formulation of friction materials is required.

Some operators are trialling retro-fitted LL-blocks made of either organic or sintered compounds. However, brake blocks made from composite materials are more cost-effective in the long run because they reduce noise levels without increasing wear on the wheel.

Federal-Mogul is developing its advanced composite material brake blocks with the German government-sponsored LäGiV project (www.laegiv.de). The scheme could help to halve rolling noise levels, achieving an average reduction of 10dB. The composites being designed are helping to produce products that significantly reduce noise while still keeping in line with the company's LCC approach. The new products will be fully developed and commercially available to the industry by 2014.