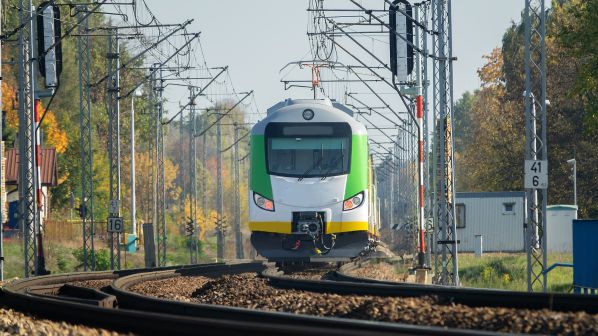 Poland is aiming to source 80% of the electricity required for its railway from renewables by 2030, up from around 15% at present. Photo: Shutterstock/Maximillian Cabinet

POLAND’s railway is embarking on a green energy revolution. The network sources 14.8% of its electricity from renewables at present, in line with the average for the wider economy. However, PKP Power Engineering, which designs, builds and manages energy infrastructure, and distributes electricity to network users including operators and infrastructure manager PKP PLK, is aiming to reach 85% by 2030.

Mr Wojciech Orzech, PKP Energetyka’s CEO, says that on taking the job in 2015 he asked his staff what the company could do to improve the situation for its clients. He says with its focus on delivering an uninterrupted supply of electricity, the core business is relatively straightforward. The source of that electricity was therefore the logical area to look at, and the conclusion was reached that it could change the “colour” of the electricity supplied.
Orzech says that his team soon raised the prospect with clients. And while they thought the idea of using green electricity was interesting the response was “maybe later.”

By 2019 the tide had seemingly turned. With the emissions reduction targets enshrined in the Paris Agreement increasingly dictating energy policy, Orzech says clients began to raise the prospect of greening the logistics chain. Critically, train operation tenders were offering more points if bidders could demonstrate greater levels of sustainability. To compete, these companies needed to become greener and that naturally made them look at where they sourced their electricity.

Independent research backed up these assertions. Indeed, Orzech says this work found that passenger and freight volumes could potentially increase by 12% if the electricity powering rail is green. At the same time the railway industry established the Polish Centre of Railway Energy Efficiency (CEEk). Comprising approximately 70 members, the group consumes 95% of the electricity used by Poland’s railway and is working together to solve two major issues: how to make the industry more energy efficient by developing the capability to store and release electricity to the network as required; and how to source this electricity from renewable sources. Thus, CEEk established the Green Railway Programme as its flagship initiative.

“We agreed that by being green we could all be far ahead of other industries and modes of transport, and that we must take the opportunity to make the industry more attractive,” Orzech says. “Our idea is not to grab a greater share of the pie that we have today, but to create a bigger pie. If the pie is bigger, everyone can benefit from that.”

Orzech is clear that PKP Energetyka’s clients are driving the Green Railway Programme’s agenda. The company estimates that around 2.0-2.5GW of renewable energy is required to power the railway network. However, rather than simply purchase green electricity generated in a neighbouring country through a Power Purchase Agreement (PPA), the company is adopting an innovative approach: stimulating the energy production market to embrace renewables and buying from local producers.

“The storage facility has already worked more than 7000 times and we have gathered a lot of data.”

This approach expands on the company’s typical top-down supply of energy from the national grid to the operator. Orzech says making the best use of renewables requires a more local approach to generation. “The biggest advantage in renewables is to produce and consume energy at the same location because then you don’t have the waste associated with transmission and distribution,” he says.

Together with Polish scientists and experts, PKP Energetyka has come up with a multi-layered solution to tackle this challenge. The first layer is the traditional top-down energy supply structure from the national grid, sourcing electricity from the around 17GW of renewable electricity generated in Poland each year. Beneath this it has identified 300 “microgrids” which are tied to the two or three substations that supply existing lines. These sites will become the location for the production and storage of renewable energy generated primarily from solar or wind although the company is open to other technologies including biomass or biogas.

Working closely with scientists and engineers at the University of Zielona Góra, PKP Energetyka is focusing its initial work on energy storage through trials at a pilot site at Garbce in the Zmigród commune, 50km from Wroclaw. And it is already reporting encouraging progress.

The “energy reservoir” is equipped with four battery containers made from NMC with a total of 4240 lithium-ion cells. There is 5.5MW of storage capacity, including 1.2MWh of usable capacity, which is sufficient to power a single train travelling at 160km/h. The storage facility is designed to align with the nature of the rail network, which is electrified at 3kV dc, allowing the cells to charge slowly and release stored energy quickly when a train passes. A dc/dc power converter is at the centre of the facility, and this operates directly on dc/dc voltage. In the case of other dc-powered rail systems, traction storage facilities yield ac output that forces dc/ac/dc conversion. Bypassing this transformation significantly improves storage facility operations, resulting in energy savings.

“This storage facility has already worked more than 7000 times and we have gathered a lot of data,” Orzech says. “We are now seeing whether we can build a lot of algorithms that improve the management of this entire system.”
Further upgrades include installing renewable energy generation capability at the site through the addition of a small-scale photovoltaic station in the next few months. Orzech says this is only limited in its size by the lack of physical space. “It is not about the scale, but analysing how it will work together,” he says. “We will then have all of the components of a future microgrid.”

While the same principle of energy supply to meet the needs of rail users applies, Orzech says production, storage and distribution will be tailored to local demand with the specific substation adapted accordingly. For example, storage capacity will vary according to the type of service and consistency of demand; a suburban line is quite different from the needs of lines served by heavy-duty locomotives for freight transport, for example.

“We built tech analysis and created groups of profiles of substations based on expected electricity usage,” Orzech says. “We also considered the potential availability of plots of land to build renewables. There are various criteria and taking these into account we concluded that the microgrids should not be too big otherwise it would be hard to balance production and energy delivery.”

There are of course benefits and risks to this approach. Orzech says local sites can eliminate the “substantial” energy losses associated with using “long hot lines,” which sometimes can reach 5-10%. Using less of this type of infrastructure also reduces investment in long power line infrastructure across Poland. In addition, a local model is more resilient in the event of a malfunction.

“If you have a failure somewhere on the network, distribution to some parts of Poland might be disrupted,” Orzech says. “Potentially with storage you can keep the supply going. And with the microgrid structure they could work like an island independently of the network.”

Orzech says the overall structure is “extremely complex” and a lot of digital tools are required to effectively manage such a splintered network. For example, to measure factors such as local weather conditions to consumption, and delays to traffic and how this may impact potential demand.

Orzech says getting to an 80% share from renewables effectively means it is possible to get to 100%. However, the company has not made a full commitment to leave room for another technology to generate this remaining share. He has particularly high hopes for hydrogen and work is already underway to realise the potential of this fuel.

Specifically, Orzech says the company is approaching the development in two ways: looking at storage and the use of hydrogen as fuel for rail vehicles. Under its plan, PKP Energetyka is eyeing the construction of 50 hydrogen storage facilities across Poland and launched a tender last month for components to construct a hydrogen-based storage solution at Garbce. This facility will produce green hydrogen using electrolysis powered with solar energy, working in tandem with the under construction photovoltaic installation.

Orzech says while electrification is always preferred, hydrogen fuel could prove beneficial in situations where there is a limited business case for putting up wires, or in situations where energy storage is not efficient, such as unpredictable movements in ports where trains may only demand energy for short periods and many hours apart. “The costs of building this infrastructure and having high power reserves may be more expensive than having a hydrogen fuel station,” he says.

Nevertheless, Orzech describes the situation with developing hydrogen infrastructure as “a chicken and egg” with Poland not yet having any hydrogen trains or infrastructure to fuel those trains.

“We don’t yet have hydrogen trains in Poland, but we also don’t have fuelling stations, or an understanding of how and where they will operate, and where these fuelling stations should be located,” he says. “We have to be prepared for this discussion, with an idea of how to build it, how to construct it, how to operate the trains, and then agree with operators on locations and volumes.”

Orzech is hopeful of attracting EU funds to support investments hydrogen as well as the Green Railway Programme as a whole. And he is optimistic given its strong support for Poland’s railway modernisation programme at the EU.

As for wider financial support for its plan, PKP Energetyka uses its own resources as well as financing from private banks. Orzech says he believes there is a lot of money available with banks enthusiastic to support green investments.

Of course, the direction of the programme will continue to be dictated by PKP Energetyka’s clients. However, recent turbulence in the energy market in Europe following the rapid increase in wholesale prices is adding fuel to the case for local production and more sustainable energy supply.

Indeed, PKP Energetyka’s approach is opening the door to a new type of energy grid that is sustainable, more efficient and based on localised sources of energy. This work might serve as a useful example to others seeking to evolve their grids and secure greater energy independence for their railways.