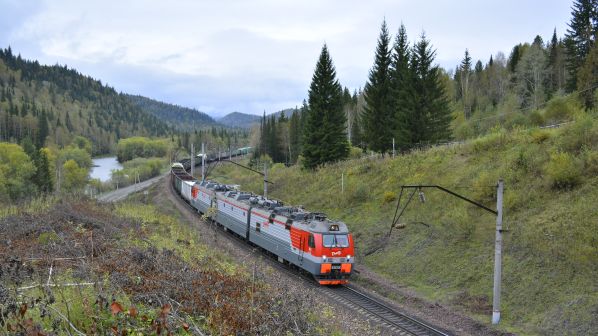 Extensive tests of virtual coupling technology have been conducted on the Scherbinka test circuit just outside Moscow. Photo: Sergey Murashev

THE ability of automatic and semi-automatic trains to run closer together and unlock line capacity is prompting railways and research institutes around the world to explore technologies and processes that replace tasks traditionally undertaken by the driver.

Russia is no exception and in many areas is leading the charge. Russian Railways (RZD) is planning to operate Lastochka EMUs using automatic train operation (ATO) at Grade of Automation 4 (GoA 4) in commercial service on the Moscow Central Circle network later this year following more than 7000km of tests at GoA 3. TMH also announced at the end of December that 630 3ES5K locomotives built for the Russian market are now equipped with virtual coupling technology, which could facilitate future convoying of freight trains in Russia, potentially reducing existing headways from 4-5km to 2-3km, offering a dramatic increase in line capacity.

The technologies at the heart of virtual coupling are supplied by TMH subsidiary AVP Technology, part of LocoTech-Signal. For Mr Andrey Romanchikov, managing director, intelligent control systems development, at TMH and CEO of LocoTech-Signal, the company’s work is indicative of a growing trend: for trains and locomotives to become smart assets that respond autonomously to the conditions around them rather than relying on a driver to react to prompts provided by traditional lineside or cab signalling.

LocoTech-Signal was founded in 2017 but TMH’s work on automation goes back more than 20 years according to Romanchikov. TMH’s ATO solution offers precise and tailored driving and braking curves depending on operating conditions, infrastructure limitations, as well as the performance characteristics of the train. Depending on application conditions, the technology can function as a driver advisory system (DAS) or ATO. The system provides an optimal driving strategy and in ATO mode controls acceleration and braking of the locomotive to optimise performance, effectively reducing the role of the driver to an “algorithm” which monitors the system.

This equipment is already fitted to more than 6000 locomotives operating across Russia, Kazakhstan and Belarus, and Russian Railways (RZD) is now engaged in a programme to fit the technology to 500-600 locomotives every year. Romanchikov says the system is helping to reduce fuel and energy consumption by 8% and working to traffic schedules with an accuracy of up to 1 minute, improving the efficiency of network operation. In addition, it is configured to respond and operate in various weather conditions which can impact performance, and is certified to function at up -50˚C.

Earlier generations of TMH’s ATO system offer semi-automatic operation on open main lines, with drivers responsible for controlling deceleration and acceleration in station areas. Romanchikov says this remains the greatest source of disruption and unpredictability to operation. He reveals that a pilot is due to commence this year under which locomotives will enter and leave stations autonomously, effectively the development of ATO at GoA 2.

“In Russia, like in many other countries, investing in new tracks to increase capacity is very expensive. This is why RZD has started to invest in this technology. They really believe in what we’re doing.”

As well as supporting operation, TMH’s driving optimisation and ATO solutions are the foundation of virtual coupling. At its heart lies a deep integration between ATO and the Train Control Management System (TCMS) as well as point-to-point communications system between two virtually coupled trains. The two trains communicate location data, running parameters and their respective masses in real-time with the allowable distance between the two trains calculated according to the specific operating situation, the train’s speed and mass, track characteristics and other factors impacting braking distance. The trailing locomotive automatically responds to the driving actions of the lead unit, meaning it is possible to operate at reduced headways because the safety margin is less. Crucially, no additional wayside infrastructure is required, only the upgraded ATO, ATP and TCMS software, and the radio-communication module. The P2P network uses Russia’s existing 160MHz train-to-train communications frequency to exchange information between the locomotives.

Romanchikov says TMH has conducted extensive tests of the virtual coupling technology, concluding a four-year testing cycle in spring 2020. Tests in Russia’s Eastern Range where more than 100 train pairs operate per day increased the capacity of the section by 15%. He says these tests showed that it could be possible to convoy up to five trains using the virtual coupling system and that the P2P communication network can work reliably up to a distance of 8km between trains.

“In Russia, like in many other countries, investing in new tracks to increase capacity is very expensive,” he says. “This is why RZD has started to invest in this technology. They really believe in what we’re doing.”

The technology is now installed as standard on all new 3ES5K units, with 136 of these locomotives built in 2021. Another 500 existing units have been retrofitted with the technology and Romanchikov expects a steady retrofitting of the RZD fleet over the coming years with significant potential to increase the capacity of westbound traffic from Siberia to ports and industrial facilities in the west. He foresees no interoperability issues with locomotives built by other manufacturers, stating that TMH is working with Wabtec and Alstom’s plants in Kazakhstan on using several products on their locomotives. “It does not depend on TMH,” he says. “We are talking about TMH because this is part of TMH’s strategy, but it should be adapted for other locomotives, and interface with their braking and control systems.”

Romanchikov says further developments of ATO include providing diagnostics information for the locomotive and infrastructure. Data from the locomotive’s systems and components are sent to centralised servers for processing. “Our idea and the idea of our customers is to use this data to support more efficient maintenance,” Romanchikov says. “If you know in advance what exactly is happening with the train, you can make your maintenance plans a lot more efficient.”

The next step in the virtual coupling and ATO story is evolving the train-to-train communication capability to such an extent that traditional track circuits and axle counters become redundant. Indeed, LocoTech-Signal is developing its [email protected] 400 computer-based interlocking system to control points, signals, and other objects necessary for safe railway operation and effective infrastructure monitoring. Romanchikov says there are numerous challenges in this regard, not least calculating the precise position of the train as safely as possible. Functions such as operating switches could be controlled by the train but this will require significant work to prove that operation is safe.

Romanchikov is optimistic that this work will produce results and potentially a revolution in railway operation, offering 2024 as a realistic date for a pilot project. He adds that as well as Russia, LocoTech-Signal could potentially target the other markets and areas where lineside equipment has proven vulnerable to theft and vandalism.

Computer vision technology is set to play a key part in this transition by enabling trains to respond quickly to distant objects and anomalous situations up the track, which may cause a safety issue and disrupt operation. LocoTech-Signal’s [email protected] 100 system comprises various sensors, radar and lidar technologies and thermal viewers and is used to detect obstacles, monitor the surrounding area in real-time, remotely control rolling stock and analyse signals and point positions.

Romanchikov says tests of the obstacle detection capability on EMUs have already proven reliable at 600m on straight line sections, more than three times more effective than a driver on a clear day. Tests on a shunting locomotive have similarly been proven at up to 100m in curves.

Machine learning techniques are the foundation of computer vision. By learning to recognise objects and anomalies they gradually offer an appropriate response to different scenarios, learning to ignore some and alter the train’s behaviour to others. As well as safety applications for rolling stock operation, Romanchikov says computer vision is also set to assist railways to monitor infrastructure, helping to effectively identify defects to track or electrification infrastructure, and to target maintenance and repair activities. Thirdly, he says it could facilitate remote control for shunting locomotives, another field where LocoTech-Signal is active. “One operator could control up to five operating locomotives using machine vision,” he says

Again, Romanchikov reveals that several pilots with this technology are underway, including with private Russian infrastructure owner Cherepovets Steel Mill, which is held by PAO Severstal, one of the world’s largest steel companies. Tests of the remote-control technology are also taking place with TMH’s latest shunting locomotives while [email protected] is being rolled out on the Kazan metro to support the introduction of a driverless network but without the traditional features such as platform screen doors.

“My prediction is that in a few years we will reach a situation where each locomotive produced by TMH will be equipped with lidar, cameras and radar. It will be like a modern car which is not possible to buy now without this equipment installed.”

Romanchikov says the biggest challenge facing main line deployment at this point is securing the sophisticated and expensive camera equipment although the costs are falling each year. It is also not an off the shelf product that can be brought over from other industries, further complicating the situation. “Your success here depends on how much you teach your software based on real railway data,” he says. “This is why we started on this several years ago. We gave our IT companies access to the real railway data and they used our software. We have a good relationship with our customers. We also work at TMH plants where tracks are installed so we can simulate different situations.

“My prediction is that in a few years we will reach a situation where each locomotive produced by TMH will be equipped with lidar, cameras and radar. It will be like a modern car which is not possible to buy now without this equipment installed.”

As for any company working at the cutting edge of technology, LocoTech-Signal faces a challenge with securing and nurturing talent to deliver the level of innovation it requires. Romanchikov describes people as the company’s most important investment, but its difficulties are not unlike major tech firms such as Google. He says the company is populated with professionals with an average age of 25 to 26 who are enthused and inspired to work on the company’s projects.

Likewise, LocoTech-Signal continues to invest in research and development projects that will continue to push the company forward. “If we see a request from a customer or if we feel a certain project could provide more efficiency to a customer, we will invest in this technology, in new teams, and in new labs,” Romanchikov says.

He adds that a new initiative is engaging start-up companies to work with LocoTech-Signal similar to other programmes undertaken by railways and suppliers around the world. A new company, TMH Advance Technology Center, has been founded within TMH to nurture the ideas from these start-ups, which can vary from ideas produced by one or two entrepreneurs to solutions presented by already established firms. Indeed, Romanchikov and LocoTech-Signal intend to explore all avenues to achieve their vision for autonomous railway operation. They have made admirable progress, which is already producing efficiency savings for Russian railways, with more expected in the coming years.