Delays are a common problem when travelling by rail. Richard Clinnick reports on new information systems developed by LB Foster which are already helping improve the provision of information to passengers. 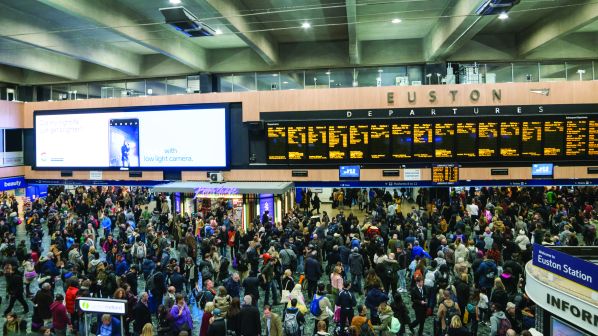 AT some point every passenger has been delayed while travelling by train. One of the constant themes of the National Rail Passenger Survey conducted by the watchdog Transport Focus in Britain is that information available during disruption needs to be improved.

Increasingly passengers are turning to social media to find information regarding delays to their journey. This can be more-up-to-date than the information possessed by staff either at a station or on a train, which can be frustrating for both those asking the questions but also those trying to answer them.

One solution that is offering multiple functions was presented by LB Foster during an event held in London earlier this year. The company has developed electronic totems, which are digital screens placed at stations. These can be used for information provision and ticket sales and British infrastructure manager Network Rail (NR) is currently using the technology in a trial to provide improved information to passengers with disabilities. Various passenger operators are introducing them at stations they manage across the country.

TransPennine Express (TPE) customer communications manager, Mr Alex Berry, said during the event that there are 14 totems at eight stations on the operator’s network. This will rise to 16, and there are plans for a further 15. TPE’s network covers northern England from Liverpool and Manchester in the northwest to Leeds and York, up to Newcastle in the northeast, and then to Glasgow and Edinburgh in Scotland.

Berry says feedback from passengers on their experience during disruption tends to focus on the lack of detailed information about what is going on.

Berry explains that the screens show a general summary of planned departures and arrivals at the station, and any additional information such as planned engineering work and subsequent planned cancellations and replacement of rail services by buses. Local information and advice on topics such as walking routes or local events can also be provided along with disruption maps, which highlight the section of network affected.

“It is something we have not done before because you are not only explaining where the problem is in the text, but you are showing it on the map,” he says, adding that this helps passengers understand where it will cause disruption and if the specific location is not included exactly what the effect will be on services.

Berry reports that general feedback from both passengers and staff has been good so far. “This is not something additional just for the sake of doing it,” he says. “This is something that you can use on the ground day to day, and it will help staff when communicating with passengers.”

At London Euston information provision is being tested in a different way, with the first totems providing up-to-date information for deaf passengers. Should this prove successful it could be rolled out across the country. This is the idea of Mr Mervyn Pierce, Euston station manager, who took his experience of dealing with passengers when working in customer-facing roles, and set about creating a solution for those with disabilities.

“This is something that you can use on the ground day to day, and it will help staff when communicating with passengers.”

Using British Sign Language (BSL), the totems provide information for those with hearing problems. This is displayed at eye level rather than on the large information screens above the platforms, as this makes them easier to locate. The longer-term plan is that media screens will be used to provide details of the next five trains via sign language.

The trial operates between 08.00 and 18.00. Messages can be sent to the totem and are in turn converted into information that is communicated using BSL.

“Whatever we’re typing into the computer is what they’ll pick up and they will actually then sign,” Pierce says. Typically this takes up to 20 minutes for the information to be shared. The software is still in development, he says, but in the future it is hoped that the service will be available 24/7, and that the messages can be put out in real time.

Mr Graham Kett, LB Foster technical operations manager, explained that the system is web-based and that enables station staff to access the system from their phone or tablet while they are actually on the station.

Kett explains that anything over 1.4m high must be accessible. Passengers in wheelchairs are able to use them as the screens can flip from top to bottom. A high-contrast option is also possible, helping those with visual impairments. The screens can also be multi-lingual, meaning they can be tailored to arrivals at airports.

Data on the use of the totems is fed back to LB Foster, which helps to inform decisions on how they might be improved.

Kett says cybersecurity is important too. After all, the last thing people want is for inappropriate material to make it onto the screens. A built-in security system has been created to stop that from happening with the web portal used by the totems hosted by Microsoft Azure. Kett says this is essentially Microsoft’s computer, not LB Foster’s.

“You have all of the security that Microsoft puts into all of their systems,” he says. “We benefit from all of that as well.”